Turkey has warned it will intervene if Shia militias pushing towards ISIL’s stronghold of Mosul commit atrocities in a northern Iraqi town with strong ethnic ties to the country.

Turkish President Tayyip Recep Erdogan on Sunday said Ankara – which already has a military presence in Iraq – would act if forces from the Popular Mobilisation Units (PMU) abuse civilians in their fight for the town of Tal Afar.

Also known as Hashid Shaabi, PMU is paramilitary umbrella organisation dominated by Iran-backed Shia militia. Erdogan said Turkish forces would step in if the militias “unleash terror” on Tal Afar, which they are preparing to seize from ISIL fighters.

Tal Afar is inhabited by Turkmen – an ethnic group with strong cultural and historical links to Turkey.

“Tal Afar is a very sensitive issue for us. We definitely do not regard it [Shia militia involvement] positively in Tal Afar and Sinjar,” Erdogan said.

“Tal Afar is a totally Turkmen city, with half Shia and half Sunni Muslims. We do not judge people by their religious affiliation, we regard them all as Muslims.

“But if Hashid Shaabi terrorises the region, our response would be different.”

Turkey’s parliament voted last month to extend the deployment of an estimated 2,000 troops across northern Iraq by a year to combat “terrorist organisations”.

Ankara has repeatedly warned about the risk of sectarian conflict if Shia militias are allowed to enter Sunni-majority Mosul.

In other parts of Iraq retaken from ISIL – such as Fallujah and Ramadi – there have been allegations of Shia fighters mistreating Sunni civilians.

Although it reports officially to Prime Minister Haidar al-Abadi, the Shia militia coalition is mostly made up of groups trained by Iran. They have close ties with General Qasem Soleimani, commander of Iran’s Quds Brigade, the extra-territorial arm of Iran’s Revolutionary Guards.

Soleimani was seen touring the frontlines around Mosul last week.

There was a sense of resentment among some Shia fighters on the battlefield on Sunday that the PMU have been misrepresented and their sacrifices unappreciated.

“We fight to help people return to their villages and they call us militias,” said Ali Khiali, a 40-year-old fighter affiliated with the Badr Organisation. “Is that fair?”

The flying of Shia flags by the militias and also some regular army and police units in the mostly Sunni region around Mosul have been a cause of concern for local officials. But coalition fighters have not been linked to any sectarian incidents so far in the campaign, which started on October 17.

Karim al-Nuri, a faction of PMU, and Jaafar al-Husseini, a spokesman for the Hezbollah Brigades, another member group, said a total of about 15,000 Shia fighters were participating in the battle for Mosul.

The Iraqi military confirmed the figure, which – including army units, militarised police, and special forces – brings the total number of anti-ISIL fighters in the offensive to more than 40,000.

Anticipating the offensive on Tal Afar, Islamic State of Iraq and the Levant fighters have been reinforcing the town in the past 48 hours, an Iraqi security official said.

Two waves of reinforcements were deployed, including cadres who had fought in neighbouring Syria and had experience in using anti-tank missiles.

His comments could not be independently verified but a resident of Mosul, speaking to Reuters by phone, said relatives in Tal Afar reported seeing increasing numbers of ISIL fighters in the town, some of them patrolling on motorbikes.

Since launching their advance towards Tal Afar on Saturday, the Popular Mobilisation forces have taken over several villages.

Meanwhile, the Kurdish Peshmerga said in a statement on Sunday they had cleared at least 28 villages north and east of Mosul since the start of the offensive.

“Peshmerga Forces have cleared more than 500 square kilometres from ISIL,” it said, adding they “have dealt a devastating blow against ISIL terrorists, killing dozens”. 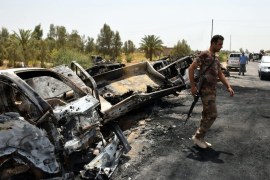 Probe highlights US failure to control armed groups who detained and tortured Sunni men after routing ISIL from city.

Human Rights Watch says Shia and Kurdish militia accused of abuse should stay away from battle for key Iraqi city.