Beirut – Lebanon is on the brink of filling its presidential vacuum after two-and-a-half years without a leader.

On October 20, Saad Hariri, the leader of the Future Movement, endorsed his political opponent, former general Michel Aoun, for president. Hariri – the son of former prime minister Rafik Hariri, who was assassinated in 2005 – said that his endorsement was made in the interest of Lebanon’s overall well-being.

But some of his party’s most notable figures quickly condemned Hariri’s endorsement of Aoun, whom Hezbollah has supported from the beginning. The endorsement signals a weakening of the Future Movement.

The next parliamentary session to elect a president will be held on Monday. If Aoun moves into Baabda Palace as president, what will that mean for Lebanon? With a president finally in place, will the Lebanese government be able to take a more proactive role in confronting the major security and economic issues facing the country?

INTERACTIVE: Lebanon at the crossroads

Many Lebanese citizens say no. Julia, a Beirut resident and owner of a small family business, is not optimistic that having a president will improve Lebanon’s fragile and indebted economy.

“Lebanon’s rulers have been changing alliances and making different kinds of deals,” said Julia, who did not provide a last name. “It’s what we expect from them. I don’t see a new president leading to the improvement of the economy – at least not for ordinary people.”

Like Julia, political activist Rana Khoury believes that it will be business as usual with a new president.

“The cake would be once again divided between sectarian leaders, and the people are always paying the price,” she said.

My guess is that, in the coming months, we are going to witness an intensification of this crisis.

Bassel Salloukh, professor of political science at the Lebanese American University in Beirut

Nor would having a president necessarily put an end to Lebanon’s ongoing political crisis. Bassel Salloukh, a professor of political science at the Lebanese American University in Beirut, said the recent developments reflect Lebanon’s post-war politics, characterised by perpetual crises.

According to Salloukh, the endorsement is symptomatic of a crisis within Lebanon’s sectarian elite: “My guess is that, in the coming months, we are going to witness an intensification of this crisis.”

For instance, the election of a president could be followed by another struggle over forming a new cabinet. Allocating ministerial positions in such a way that maintains political and sectarian balance could take months.

In some respects, Lebanon has been lucky: The current presidential vacuum has not appeared to majorly harm the country. Aside from Lebanon’s rubbish crisis, the result of an emergency plan implemented in 1997, no new domestic political issues have emerged since former President Michel Suleiman’s term ended in 2014.

Lebanon experienced a much more severe political crisis in 2008 during its last presidential vacuum. That May, violent clashes broke out between Hezbollah and its allies against opposing militias, the most intense fighting since the end of the civil war. It was not until an agreement was signed in Doha that Suleiman was chosen as a consensus presidential candidate. The country was relieved, and the Doha Agreement and Suleiman’s election put an end to the clashes.

While many doubt that having a president will lead to any real change, some civil society activists worry that Hariri’s endorsement and its political repercussions could actually make their position worse. Last year, Lebanon’s garbage crisis sparked months of anti-establishment protests by groups unaffiliated with political parties.

Activist Samer Abdullah said that during this time, relations between Lebanon’s two rival political factions – the March 8 Alliance and the March 14 Alliance – thawed somewhat, and a new narrative emerged: The people versus a single political establishment.

However, the new web of alliances and rivalries created by Hariri’s endorsement could bring about a return of “ruling” and “opposition” factions within the establishment.

“With political leaders like [Progressive Socialist Party leader Walid Jumblatt] and [Amal leader Nabih Berri] opposing Aoun as president, there is now a more defined political opposition,” Abdullah said. This, he believes, may shrink the political space available for independent movements and threaten the momentum they had achieved.

Twenty-seven years ago, when the Taif Agreement was signed to put an end Lebanon’s brutal 15-year civil war, Lebanon had the potential to thoroughly rebuild itself from the ground up. And it has been rebuilt in a physical sense, with the rubble left by the fighting in downtown Beirut replaced by skyscrapers.

But many Lebanese sense that the country’s political establishment remains largely the same – even when new alliances form between politicians once entirely at odds with each other, such as Saad Hariri and Michel Aoun. 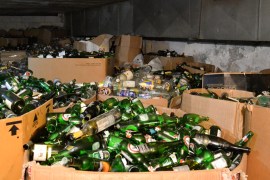 One year on, the crisis remains unresolved – but new initiatives have brought recycling to the forefront. 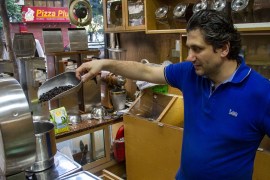 Of war and coffee in Lebanon

Ten years after the 2006 Israel-Lebanon war, coffee vendors reflect on how decades of turmoil have affected their lives.