Islamic State of Iraq and the Levant appears to be using tens of thousands of people as “human shields” in and around Mosul, where Iraqi forces are waging an offensive aimed at retaking the country’s second biggest city.

The UN human rights office also said on Friday it received reports of more than 200 people being killed for refusing to follow orders from ISIL, also known as ISIS, or previously belonging to Iraqi security forces.

It said “credible reports” suggested ISIL had been forcing tens of thousands from their homes in districts around Mosul.

ISIL pushed out of town near Mosul as advance continues

“ISIL’s depraved, cowardly strategy is to attempt to use the presence of civilian hostages to render certain points, areas, or military forces immune from military operations – effectively using tens of thousands of women, men and children as human shields,” UN spokeswoman Ravina Shamdasani said in Geneva.

She said at least 232 people, mostly former Iraqi officers, were reportedly shot on Wednesday, and 24 on Tuesday. The group is widely believed to be rooting out anyone who could potentially rise up against it, focusing on Iraqis with military training or past links to security forces.

Iraq launched a massive operation on October 17 aimed at retaking Mosul, which fell to ISIL in a matter of days in the summer of 2014. Iraqi forces are advancing from several directions, but are still outside the city itself.

The US military, which is providing air strikes and ground support for the operation, said it tried to disrupt the forced displacement of civilians south of Mosul earlier this week by striking fighters’ vehicles being used in the operation.

US Air Force Brigadier General Matthew Isler said the US-led coalition conducted “precision strikes” on vehicles that were unoccupied and far away from civilians.

“We were able to do that without harming any civilians,” he told The Associated Press news agency. He said the forced displacement was another example of the group’s “atrocities”.

Al Jazeera spoke to Iraqi resident Bassam Hussain in al-Fadiliya, a town near Mosul that was subject to US-coalition air raids. While some celebrated their town’s liberation, others mourned the loss of their homes.

“It took me 10 years to build this house, I spent all my life savings on it,” Hussain told Al Jazeera. “Now I have nothing. What crime did I commit? I have suffered from ISIL and those fighting them. Who’s going to help me rebuild my life?”

Hussain questioned the need for air strikes. He said there were no more than 15 ISIL fighters in his town.

“Even if [Peshmerga and Iraqi forces] do succeed [in driving out ISIL], with tens of thousands already displaced and entire towns destroyed, this part of the world will remain devastated for a long time to come,” said Al Jazeera’s Jamal Elshayyal, reporting from Fadiliya.

Media reported earlier this week that ISIL fighters were going door to door in villages south of Mosul, ordering hundreds of civilians at gunpoint on a forced march north into the city, apparently to use them as human shields.

“ISIL took all of us from our homes at gunpoint and told us they were taking us with them to Mosul,” Ahmed Bilal Harish said. “They said if you don’t come with us you’re an unbeliever.”

He said he and his family were only able to escape when a volley of air strikes caused the fighters to scatter during the 40km forced march from their home in the town of Shura to Mosul.

The UN and rights groups have expressed fear that more than 200,000 civilians could be displaced in the opening weeks of the offensive. Mosul is still home to more than a million people.

ISIL has built up elaborate defenses on the outskirts of the city, including an extensive tunnel network, and has planted large numbers of explosive booby traps to slow the troops’ progress.

Isler said Iraqi forces have retaken 40 villages from ISIL near Mosul since the operation began. But most of the fighting has taken place in a belt of sparsely-populated farming communities outside the city. 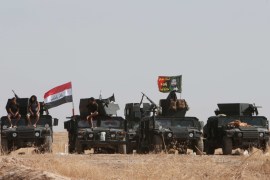 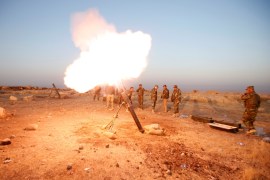