At least 25 people have been killed, six of them police, in two days of violence around the town of Bambari in the troubled Central African Republic, the UN force MINUSCA has said.

Six police and four civilians were killed in an ambush by armed men on Friday morning, while on Thursday, 15 people died in fighting on the town’s outskirts between former Muslim Seleka rebels and Christian vigilante groups known as “anti-balaka” (anti-machete), MINUSCA said in a statement on Saturday.

MINUSCA condemned the violence around the central town of Bambari and appealed to the two militia groups behind the clashes to respond to an invitation by President Faustin-Archange Touadera for talks.

There was no immediate comment from the government or the militias.

The latest fighting comes after the mostly Muslim Seleka rebels killed more than 40 people during two attacks in the same region earlier this month.

Thousands of people have been killed in the wake of violence that erupted after the Seleka rebels seized power in the Christian-majority country in 2013. In nearly two years of civil war that ensued, about a quarter of CAR’s 4.7m population has been displaced.

Since a new government was elected in February, with President Faustin Touadera at the helm, the landlocked country has seen a reduction in violence between rebel groups.

Clashes force 5,000 to flee after beheading in CAR

Fresh violence in central town of Bambari comes ahead of planned presidential elections next month. 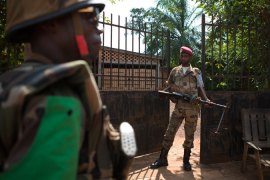 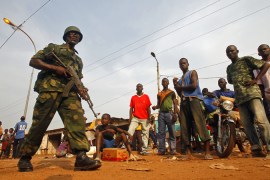