Turkey’s justice minister has pressed the United States to extradite a cleric it accuses of orchestrating a failed coup attempt last July or risk seriously harming relations between the two countries.

Bekir Bozdag, who spoke to reporters a day after meeting US Attorney General Loretta Lynch, accused the Pennsylvania-based Fethullah Gulen of being a “terrorist”.

“Whatever Osama bin Laden means for the United States and for the American people, Fethullah Gulen means the same for Turkey and Turkish people,” Bozdag said.

“Just imagine that there was an assassination attempt on President Obama and his family, or the White House and civilians were bombed, tanks were marching in the streets, people were shot, and US civilians were killed and thousands were injured,” he said.

“Just imagine that scenario. And after all this, just imagine that the manager and the perpetrator of all these activities was residing in Turkey. What would the American people think about that?”

The US has been reluctant to extradite Gulen, stressing that Turkey must first present sufficient evidence of his involvement in the coup attempt, during which more than 270 people were killed.

Gulen has denied any involvement.

The US justice ministry said in a statement on Wednesday that “in both countries extraditions are subject to the judicial process, and accordingly must meet the evidentiary standards of the requested country.”

Bozdag said Turkey presented new evidence against Gulen, including confessions of alleged coup plotters in Turkey who say they acted on his orders.

Bozdag also said that Gulen had received secret recordings of the conversations of a top Turkish official from one of his followers.

“But of course if the process is prolonged or if a flaw happens in this process, this would mean a huge blow to the relationship,” Bozdag said. “We want the United States to understand us, because there is a growing anti-Americanism among Turkish people.”

Separately, Turkey detained 45 airforce pilots on Thursday on charges connected to the coup attempt, while a further 28 pilots are being sought, the state-run Anadolu news agency reported.

The warrants for the detentions were issued by a prosecutor in the central Konya province. The group is made up of 71 lieutenants and two colonels.

In the wake of the coup bid, Turkey fired a total of 265 army pilots for alleged involvement in the events of July 15, or for having links to Gulen.

According to Metin Gurcan, a Turkish security analyst, after that first wave of sackings, the number of active pilots dropped from about 600 to just over 300, figures which suggest the country now has more fighter jets than pilots to fly them.

ANALYSIS: How will the military shake-up affect Turkey’s future?

In August, Turkish Airlines boss, Ilker Ayci, said his pilots may take on duties in the air force to help address the personnel deficit created by the coup attempt.

Turkey is currently carrying out air raids in both Syria and Iraq, against the Islamic State of Iraq and the Levant (ISIL, also known as ISIS) and Kurdish targets.

The Turkish government has formally arrested more than 30,000 people and dismissed tens of thousands of public sector employees since July. Thousands of army officers have been fired, including high-ranking generals. 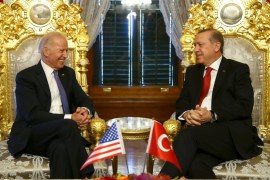 The US leadership should see Turkey in a new light and revise the usual parameters of engagement.