Syrian rebels staged a counterattack in Aleppo with heavy shelling of government-held areas after a weeks-long Russian-backed offensive against besieged districts held by rebels.

The Syrian Observatory for Human Rights (SOHR), a British-based monitoring group, said rebel shelling had killed more than 15 civilians and wounded 100 others in government-held western Aleppo on Friday.

The SOHR added that hundreds of shells and rockets had fallen on various western neighbourhoods of the city as the rebels aimed to break a siege that government and allied militias imposed in the summer with aerial support from Russia.

Aleppo, Syria’s most populous city before the war, has for years been split between a government-held western sector and the rebel-held east, which the army and its allies managed to put under siege this summer.

“There is a general call-up for anyone who can bear arms,” a senior official in the Levant Front rebel group, which fights under the Free Syrian Army (FSA) banner, told Reuters news agency.

“The preparatory shelling started this morning.”

Syrian rebels also launched Grad rockets at Aleppo’s Nairab airbase as part of the new offensive aimed at breaking the government siege of insurgent-held areas of the city, a rebel official and SOHR said on Friday.

The BM-21 Grad is a Soviet truck-mounted multiple rocket launcher which was developed in the 1950s.

Zakaria Malahifji, an official with the Fastaqim rebel group present in Aleppo, said bombardment of the airbase was part of the new offensive and a number of rebel groups would participate in it.

“Today is supposed to be the launch of the battle,” Malahifji said. “All the rebel groups will participate.”

SOHR has also confirmed that Grad rockets had struck Nairab airbase and also locations around the Hmeimim airbase, near Latakia.

Al Jazeera’s Mohammed Adow, reporting from the Turkish city of Gaziantep, near the Syrian border, said “opposition fighters in Aleppo have been talking about this offensive for weeks and now they are saying that they began firing rockets at the airbase.

“They have also targeted the west of Aleppo with more rockets and we are also hearing about a car bomb,” he said. “Opposition fighters are calling this ‘the mother of all battles’.”

SOHR said six children under the age of 16 had been killed in the two attacks.

Marwan Bishara, Al Jazeera’s senior political analyst, said that the battle for Aleppo was expected to “mutate in all sorts of directions because as we all know at the end of the day there is no military solution to the demands of people for freedom from authoritarianism and dictatorship”.

“The way it has been going in Syria is that you might win a certain battle but you will lose the next one and at the end of the day even if the Russians and the Assad regime eventually take over Alepppo that doesn’t mean that they have won the war in Syria,” he said.

The attacks came a day after air raids on a school in a rebel-held village killed more than 30 people in Idlib, 50km away.

Wednesday’s air strikes hit a school in the Haas village in rebel-held Idlib, killing at least  36 people – including 22 children and six teachers – an attack that Western countries have blamed on the Syrian military and Russian air force. Moscow has denied involvement. 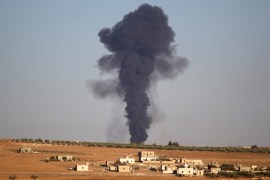