A Venezuelan policeman was shot dead and at least 120 people wounded as clashes broke out when hundreds of thousands of opposition protesters took to the streets to protest against the president.

At least 39 people were detained, and at least two other police officers were shot.

The wounded included three people who were shot in the northwestern city of Maracaibo on Wednesday, human rights lawyer Alfredo Romero said on social media, on a day of nationwide protests amid calls for a general strike and a march on the presidential palace in the capital, Caracas.

Enraged by last week’s suspension of a push for a referendum to remove President Nicolas Maduro, Venezuela’s opposition has ramped up its tactics in recent days.

On Wednesday, opposition leaders called for a 12-hour, nationwide general strike to be held on Friday, as an economic crisis continued to deepen food and medicine shortages.

They vowed to use their legislative majority to issue a declaration holding Maduro to account for his handling of the country.

“We are going to notify Nicolas Maduro that the Venezuelan people declare he has abandoned his post,” the speaker of the National Assembly, Henry Ramos Allup, said to cheering protesters in Caracas.

He said his side would deliver that ruling in a march on November 3 to the presidential palace.

Maduro, the 53-year-old successor to Hugo Chavez, accuses the opposition of seeking a coup with support from the US.

“They are desperate. They have received the order from the north to destroy the Venezuelan revolution,” he told a counter-march of red-shirted government loyalists.

In return, his opponents also accuse him of a “coup” after authorities last week halted their bid for a referendum on removing him from power.

Venezuela is home to the world’s largest oil reserves but has plunged into economic crisis owing to falling crude prices – leading to ever louder calls for Maduro to go.

Analysts have warned of a risk of violent unrest in the country.

The opposition’s vow to march on the presidential palace next week raised the tone in the power struggle.

The palace was the scene of a short-lived opposition coup attempt in 2002 against Maduro’s late predecessor and ally, Hugo Chavez.

The head of the armed forces, Vladimir Padrino, who is also Maduro’s defence minister, declared “unconditional loyalty” to the president on Tuesday.

Maduro held a meeting of his National Defense Council on Wednesday.

In televised comments at the gathering, he called for “political dialogue and peace in Venezuela”.

The council comprises top officials including the defence and security ministers.

On Tuesday, politicians voted to stage a “political and criminal trial” against Maduro.

But the Supreme Court has overruled the National Assembly’s decisions ever since the opposition majority took control in January. 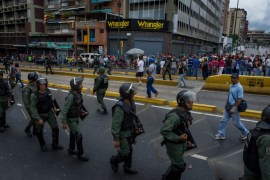 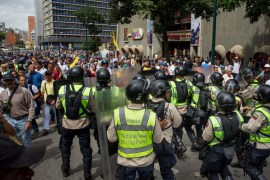 Tear gas fired and four arrests made in Caracas during rallies demanding passage of referendum to remove the president.