At least 26 civilians, including children, were killed when air raids hit a school and the surrounding area in Syria’s northwestern Idlib province, a monitoring group said.

The Syrian Observatory for Human Rights (SOHR) said on Wednesday that the bombing was believed to be carried out by Russian planes and targeted the village of Hass, including the school complex.

“The dead children are students and the planes are believed to be Russian,” said Rami Abdel Rahman, head of the Britain-based SOHR, which relies on a network of informants in Syria to track the war.

Russia’s Ambassador to the United Nations, Vitaly Churkin, said: “It’s horrible, I hope we were not involved. It’s the easiest thing for me to say no, but I’m a responsible person, so I need to see what my Ministry of Defence is going to say.”

A report on Syrian state TV quoted a military source as saying several rebel fighters had been killed when their positions were targeted in Hass, but made no mention of a school.

The raids hit the village around 11:30am (08:30 GMT), an opposition activist with the Idlib Media Centre told the AFP news agency.

“One rocket hit the entrance of the school as students were leaving to go home, after the school administration decided to end classes for the day because of the raids,” the activist said, speaking on condition of anonymity.

The SOHR initially reported two schools had been hit but later clarified that it was a school complex made up of multiple buildings.

There were fears the death toll could rise as some of the wounded were reported to be in critical condition, opposition activists said.

Idlib province is controlled by the Army of Conquest, an alliance of rebel groups including Jabhat Fateh al-Sham, which changed its name from al-Nusra Front earlier this year after cutting ties with al-Qaeda.

The province has come under increasing bombardment in recent weeks, according to SOHR.

Syrian government forces and their Russian allies have been criticised by rights groups for what they say are indiscriminate attacks on civilian infrastructure.

The Syrians and Russians say they are targeting rebels.

More than 300,000 people are estimated to have been killed since the war started in March 2011, and millions have been forced to flee the country. 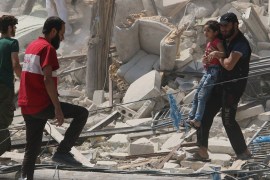 Country’s air campaign in Syria’s Aleppo prompts NGOs to call for UN member states to drop it from the council. 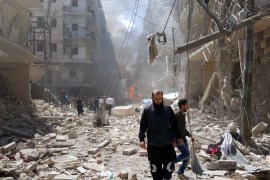 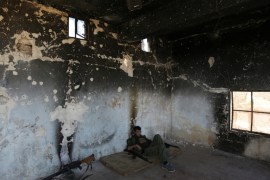 New truce in Syria’s Aleppo ruled out by Russia