Philippine President Rodrigo Duterte has announced that he wants US troops out of his country in the next two years and is willing to scrap defence pacts with longtime ally Washington if necessary.

“I want, maybe in the next two years, my country free of the presence of foreign military troops,” Duterte told an economic forum in Tokyo on Wednesday, in a clear reference to US forces, ahead of a summit with Japanese Prime Minister Shinzo Abe.

Duterte’s remarks on Wednesday during a high-profile visit to Japan follow a series of anti-American tirades by the firebrand leader.

On Tuesday, before leaving Manila and after arriving in Tokyo, Duterte also said that he wants to cut off a 2014 defence pact with the US, while calling Americans “foolish” and “a bully”.

The Philippines has a decades-old defence treaty with the United States, and a separate 2014 executive agreement, allowing US troops to use its bases by visiting American forces and expanding annual military exercises.

The US currently maintains a small presence of special forces on the southern island of Mindanao to aid counterterrorism operations.

But Duterte has already said he wants US troops out of Mindanao, because their presence stokes tensions on the island where armed groups have waged a decades-long separatist movement.

The 71-year-old has also slammed Washington for questioning his violent crime crackdown, which has claimed thousands of lives and attracted widespread international criticism.

Duterte’s first visit to Japan since he took office in June follows his trip to China last week, during which he announced a “separation from the United States”.

Asked to clarify the president’s remarks, Philippine Foreign Secretary Perfecto Yasay said Duterte did not mean US troops would be ousted, stressing that “our national interests still continue to converge”.

Later on Wednesday, during Duterte’s meeting with Prime Minister Abe, the two leaders stressed their countries’ common values as democracies that respect the rule of law.

“The Philippines will continue to work closely with Japan on issues of common concern in the region … including the South China Sea,” Duterte said after their summit.

Although Japan depends on the US for security, Tokyo has so far not responded to Duterte’s diatribes, while Washington has taken a calm approach.

Abe had worked to improve bilateral relations with Duterte’s predecessor, Benigno Aquino, providing patrol boats to support Manila in its territorial row with Beijing over rival claims to the South China Sea. 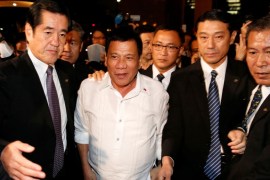 Duterte warns end to US defence pact during Japan visit

Philippine president calls the US a “bully” for hinting at cutting aid to Manila over human rights concerns.