Hong Kong’s legislature has descended into chaos after two pro-independence lawmakers defied a barring order and barged into the chamber as democrats formed a human chain around them, forcing the session to be adjourned.

At a swearing-in ceremony two weeks ago, Yau Wai-ching and Sixtus Leung modified their oaths in an act of defiance by using a derogatory word for China. Yau also slipped in an expletive.

After Yau and Leung of the Youngspiration party entered the Legislative Council’s main chamber on Wednesday, surrounded by other legislators and dozens of journalists, the body’s president ordered them to leave, but the two refused.

After half an hour, the session was adjourned until next week.

The two legislators insisted they had the right to enter the chamber to retake their oath of office. Council rules state that members cannot attend meetings or vote before they take the oath.

The two were part of a new wave of youthful pro-democracy lawmakers elected in September amid a rising tide of anti-China sentiment, with many residents concerned about Beijing eroding Hong Kong’s wide autonomy.

“If we lose this war … our system is done for. We have no room to retreat,” said Leung, tears welling in his eyes.

The democrats called on Andrew Leung, council president, to step down, while Yau accused him of “destroying the dignity” of the council.

Nathan Law, a new legislator who advocates self-determination for Hong Kong, said that while he may not endorse the pair’s behaviour when they first took their oaths, they should be allowed to sit as elected legislators.

“What we are trying to protect is people’s rights to vote, and Hong Kong’s legislative system,” Law said.

Against this backdrop, thousands of pro-China loyalists rallied outside the legislature to condemn the pro-independence legislators.

Pro-China legislators had again threatened to walk out this week if the two were allowed to retake their oaths.

Hong Kong’s city leader and the justice secretary also last week launched a legal bid to disqualify the pair because of its behaviour during the first swearing-in session.

The government’s writ seen by Reuters news agency seeks to disqualify the two and vacate their seats.

The former British colony of Hong Kong returned to Chinese rule in 1997 under the principle of “one country, two systems”, allowing it wide-ranging freedoms not enjoyed on the mainland. 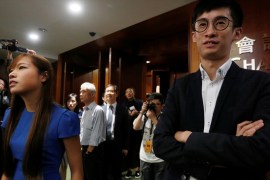