Iraqi forces have fought their way into two villages near Mosul as the offensive to retake city enters its second week.

Iraqi special forces began shelling ISIL positions before dawn on Monday near Bartella, a historically Christian town to the east of Mosul that they had retaken last week.

With patriotic music blaring from loudspeakers on their Humvees, they then pushed into the village of Tob Zawa, about 9km from Mosul, amid heavy clashes.

After entering the village, they allowed more than 30 people who had been sheltering in a school to escape the fighting.

Mosul, Iraq’s second largest city, fell in 2014 under the control of ISIL, or the Islamic State of Iraq and the Levant group, also known as ISIS.

Several countries are involved in the battle to reclaim the city, including Turkey which on Sunday confirmed its first attempted shelling of ISIL positions near Bashiqa, a key town near Mosul, at the request of Peshmerga forces.

“The Peshmerga forces have now reached the town of Bashiqa but are not inside it yet,” said Al Jazeera’s Hoda Abdel-Hamid, reporting from Erbil. “It may take a few days. They [Peshmerga] suspect that there are a few ISIL suicide bombers inside.”

Turkey’s moves on Sunday raised tensions between Ankara and Baghdad. Relations have been strained after Turkey sent hundreds of troops to the Bashiqa region to train anti-ISIL fighters.

Baghdad labels the move a violation of its sovereignty and demands Turkish withdrawal, a call which Ankara ignores.

The US-led coalition said it had carried out six air strikes near Mosul on Sunday, destroying 19 fighting positions and 17 vehicles, as well as rocket and mortar launchers, artillery and tunnels.

Human Rights Watch has called for an investigation into last Friday’s purported air strike in northern Iraq that struck the women’s section of a Shia mosque in the town of Daquq.

The strike happened amid a large ISIL assault on the nearby city of Kirkuk that was meant to distract the Iraqi forces and their allies from the massive operation around Mosul.

The ISIL attack on Kirkuk, some 170km southeast of Mosul, lasted for two days and killed at least 80 people, mainly members of the Kurdish security forces, who assumed control of the city in 2014 as Iraqi forces crumbled before an ISIL advance.

HRW said Daquq’s residents believe the attack was an air strike because of the extent of the destruction and because planes could be heard flying overhead. The New York-based watchdog said at least 13 people were reported killed.

The US-led coalition and the Iraqi military, which are waging the offensive to drive ISIL from Mosul, are the only parties known to be flying military aircraft over Iraq.

The US denied conducting the deadly strike.

Iraqi Brigadier-General Yahya Rasool, the spokesman for the Joint Military Command, confirmed the Iraqi government was investigating the attack. He declined to say whether Iraqi or coalition planes were flying in the area at the time of the explosion.

The campaign to retake Mosul comes after months of planning and involves more than 25,000 Iraqi troops, Kurdish forces, Sunni tribal fighters and state-sanctioned Shia militias. It is expected to take weeks, if not months, to drive ISIL out of Iraq’s second largest city, which is still home to more than a million people.

ISIL has suffered a series of setbacks over the past year, and Mosul is its last major urban bastion in Iraq.

“What allowed ISIL to gain large traction in Iraq was the breakdown of the political order in Baghdad,” former Iraqi ambassador to the UN Feisal Istrabadi told Al Jazeera.

“Leaderships throughout the country will have to make the necessary compromises and political bargains to dry out the swamp that allows ISIL to thrive.” 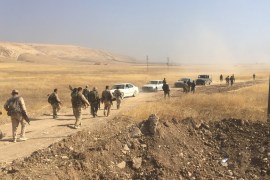 Marching towards Mosul with the Peshmerga

Peshmerga fighters and volunteers face many dangers as they continue their advance on ISIL’s de facto Iraqi capital.