Tom Hayden, a social activist and politician a stalwart of America’s New Left, has died aged 76 in Santa Monica, California.

Hayden, who served 18 years in California’s state legislature and married actress Jane Fonda, died after a long illness, the Los Angeles Times reported on its website.

“Tom Hayden fought harder for what he believed than just about anyone I have known.”

Hayden, who forged his political activism as a founding member of Students for a Democratic Society (SDS), which stood at the core of the 1960s anti-war and civil rights movements, was principal author of the group’s revolutionary manifesto, the Port Huron Statement.

The University of Michigan student ventured into the Deep South, where he joined voter-registration campaigns and was arrested and beaten while taking part in the “freedom rider” protests against racial segregation.

Hayden, however, became perhaps best known as one of the “Chicago Eight” activists tried on conspiracy and incitement charges following protests at the turbulent 1968 Democratic National Convention. He was ultimately acquitted of all charges.

A New York Times book review of his 1988 memoir, Reunion, one of more than 20 books published under his name, called Hayden “the single greatest figure of the 1960s student movement.”

Winning election himself to the California state Assembly in 1982, and then the state Senate a decade later, Hayden went on to serve a total of 18 years.

He served on the editorial board and was a columnist for The Nation magazine, and was the author of more than 20 books.

He turned over 120 boxes worth of surveillance files the US government kept on him to the University of Michgan in 2014.

“I can’t wait till after I’m dead [to make the archives public],” he told Al Jazeera at the time.

“A lot of this stuff was moulding or on the verge of moulding. It occurred to me it would be important to turn it over to some responsible researchers and archivists while I am alive and alert because it would help me go through it and share what is there with others, with professors, graduate students, with interested undergraduates.” 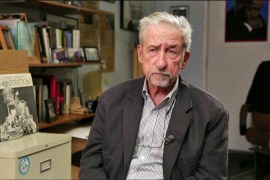 The politician and social activist talks to Empire about the strength of the progressive spirit in the US.