Hundreds of Myanmar’s Rohingya villagers are facing a second night hiding in rice fields without shelter, after the army on Sunday forcibly removed them from a village in a crackdown following attacks on border security forces.

The move marks an escalation in violence which has destabilised Myanmar’s most volatile state located in the remote northwest. In Rakhine, relations between the Rohingya and majority Buddhists have hit their lowest point since hundreds of people were killed and thousands displaced in ethnic and religious violence in 2012.

The government, led by Nobel Peace Prize winner Aung San Suu Kyi, has said the army and police in Rakhine are fighting a group of at least 400 fighters, drawn from the Rohingya Muslim minority, with links to fighters overseas.

While officials say the army has been conducting carefully targeted sweeps against the group behind attacks on police border posts on October 9, residents have accused security forces of killing non-combatants and burning homes.

“I was kicked out from my house yesterday afternoon, now I live in a paddy field outside of my village with some 200 people including my family – I became homeless,” said a Rohingya man from Kyee Kan Pyin village.

“After the soldiers arrived at our village, they said that if all of us didn’t leave, they would shoot us,” he said.

Another witness and two Rohingya community elders based in Maungdaw who are collecting information from across the area have corroborated the account, estimating a total of about 2,000 villagers were removed from homes.

Some were able to find shelter in neighbouring villages, but hundreds spent last night hiding in the rice fields. They are still stranded and are facing another without shelter.

Mynt Kyaw, a government spokesman, said the government was unable to contact anyone in the area because it was a militarily-operated “red zone”.

“A Muslim man called me this morning as they were being forcibly removed from their homes, but I was not able to confirm that information,” said Mynt Kyaw.

The military did not respond to a request for comment.

Videos uploaded on social media by Rohingya rights activists showed men and women speaking Rohingya language carrying their belongings and livestock to other villages or waiting out the crackdown in paddy fields.

The area around Maungdaw Township, near the border with Bangladesh, is under military lockdown and journalists and aid workers have not been allowed to go inside. 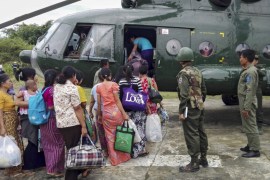 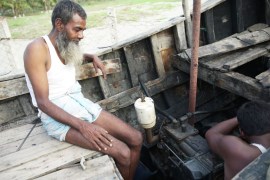 Many among the half million who escaped violence in Myanmar fear they may be pushed back once the survey is completed.