Fighters from al-Shabab have seized control of yet another town in central Somalia after it was abandoned by African Union peacekeepers, according to a spokesman for the group and a local official.

It was the third time this month that the al-Qaeda-affiliated group moved into a town in the region after the withdrawal of Ethiopian forces.

On Sunday, an Ethiopian contingent abandoned the town of Halgan in the Hiran region, allowing the group’s fighters to enter soon after, Abdiasis Abu Musab, al-Shabab’s spokesman on military operations, said.

A military offensive launched in 2014 by African Union forces and the Somali army pushed out al-Shabbab of major strategic centres, but the fighters, who once held sway over much of the Horn of Africa country, still control some settlements and rural areas.

The fall of Halgan was confirmed by Dahir Amin Jesow, a member of parliament from the region, who said residents are being subjected to reprisals at the hands of the fighters.

“Each day, civilians are being beheaded over suspicion that they are government supporters,” he told the Reuters news agency. “We do not have a government that is effective enough to protect our civilians.”

The reason for the peacekeepers’ withdrawal was not clear. Officials in Ethiopia were not immediately available for comment.

Somalia has been embroiled in conflict and lawlessness since the early 1990s following the toppling of military dictator Mohamed Siad Barre.

Propped up by the African Union-mandated force known as AMISOM, Somalia’s military and central government have strengthened their grip on the country but a relentless campaign of violence by al-Shabab persists.

The group regularly attacks AMISOM’s troops, which is made up of about 22,000 soldiers and police from African nations supporting Somalia’s government and army.

Al-Shabab aims to drive out the peacekeepers, topple Somalia’s Western-backed government and impose a strict version of Islam. 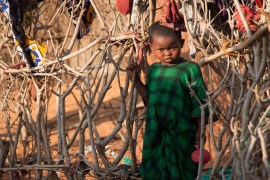 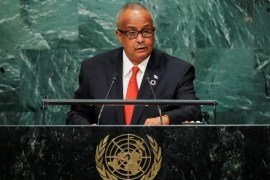 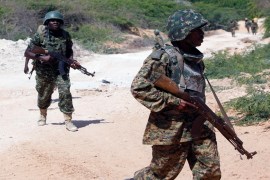 Somalia: US accused of killing 22 troops in air strike

Security official says Americans were “misinformed” in a request that came from regional rival to hit al-Shabab.