Syrian rebels backed by Turkish tanks are advancing under intense bombardment towards a major northern town in Syria held by Kurdish-led forces.

Fighting between the Turkey-backed fighters and the Kurdish-led Syria Democratic Forces (SDF) was concentrated on Saturday near the town of Tel Rifaat, the Britain-based Syrian Observatory for Human Rights said.

Ahmad Aaraj – member of the Syrian National Democratic Coalition, which is allied with the Kurds – said Turkish tanks crossed the border near the town of Marea and were heading toward Tel Rifaat.

The Turkish military intervened in the Syrian war in August to clear the border area of Islamic State of Iraq and the Levant fighters – and US-backed Syrian Kurdish forces linked to Turkey’s own outlawed Kurdish insurgency.

Turkish-backed forces will press on to the ISIL-held town of al-Bab in Syria, President Tayyip Erdogan said on Saturday, emphasising Ankara’s drive to sweep ISIL and Syrian Kurdish fighters from territory near its border.

The Syrian military, however, said the presence of Turkish troops on Syrian soil was unacceptable, and a “dangerous escalation and flagrant breach of Syria’s sovereignty”.

Backed by Turkish tanks, special forces, and air strikes, the rebels fighting under the loose banner of the Free Syrian Army crossed into northern Syria in August and took the border town of Jarablus from ISIL largely unopposed.

The rebels have since extended those gains and now control an area of roughly 1,270 square kilometres in northern Syria.

While Turkey’s initial focus was on driving ISIL from Jarablus, much of its efforts have been spent on stopping the advance of US-backed Syrian Kurdish fighters.

“They say, ‘Don’t go to al-Bab’. We are obliged to, we will go there,” Erdogan said in a speech in the northwest province of Bursa. “We have to prepare a region cleansed from terror.”

Erdogan also said Turkey would do what was necessary with its coalition partners in Syria’s Raqqa – ISIL’s main stronghold in the country – but would not work with the Syrian Kurdish fighters.

Differences over Syria have caused strains between NATO allies Turkey and the United States. Washington is backing the Syrian Kurdish YPG militia, seeing it as an effective partner in the fight against ISIL.

The outlawed Kurdistan Workers Party (PKK) has carried out a three-decade insurgency that has killed more than 40,000 people, mostly Kurds, in Turkey’s largely Kurdish southeast.

Both sides are supposed to be fighting ISIL in Syria, but escalating clashes between them have highlighted the conflicting agendas of Turkey and the United States in the increasingly complex battlefield of northern Syria.

Statements from the Kurdish fighters on Saturday said an intense attack was being waged by Turkey-backed forces with tanks and heavy shelling.

The Syrian military said earlier this week it would bring down any Turkish warplanes entering Syrian air space and reiterated its warning against Ankara on Saturday.

“The presence of Turkish military units inside the Syrian border is totally unacceptable in any form. We will deal with them as an occupying force and will confront them by all possible means,” the Syrian Army General Command said. 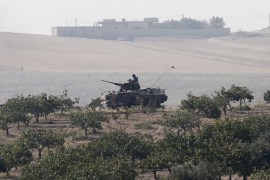 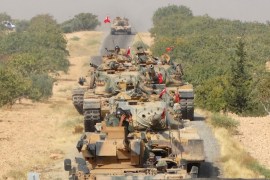