ISIL fighters may be preparing to use civilians as human shields – or simply kill them – rather than let them be liberated in an Iraqi offensive to retake Mosul, according to the UN human rights chief.

Zeid Ra’ad al-Hussein said his office had reports that civilians were being held close to Islamic State of Iraq and the Levant positions in Mosul, possibly as a buffer against advancing Iraqi forces.

“There is a grave danger that ISIL fighters will not only use such vulnerable people as human shields, but may opt to kill them rather than see them liberated,” Zeid said in a statement.

READ MORE: Inside Mosul – ‘We fear for our lives’

Separately, Zeid said his office had reports that ISIL fighters had forced an estimated 200 families to walk from the nearby Samalia village to Mosul last week.

Another 350 families were forced to Mosul from Najafia, according to the rights office.

Elite Iraqi troops have been  closing in on Mosul , the last ISIL bastion in Iraq, in a long-anticipated offensive.

The UN has voiced fears that a million people still trapped inside Mosul could be forced to flee the fighting, sparking a humanitarian emergency .

But she cautioned the number could be higher depending on how the military campaign develops.

UNHCR was working to build up camps and emergency settlements in the area as fighting intensifies.

Families inside Mosul say they are living in fear and desperation as the military operation pushes on.

“There is no way out for us as families. Even if we think about fleeing the city, that is not possible at the time being. We are being held hostages. ISIL took the whole city of Mosul as hostage,” a 36-year-old father of three told Al Jazeera over the phone this week from inside Mosul.

‘ISIL has no regard for human life’

Aside from caring for those who manage to flee, Zeid stressed that Iraqi military planning for the US-backed offensive needs to prioritise civilian protection, especially with some of the combat expected to take place in confined urban settings.

“We know ISIL has no regard for human life, which is why it is incumbent upon the Iraqi government to do its utmost to protect civilians,” he said.

Ravina Shamdasani, of the UN human rights office in Geneva, said it had “verified information” that the ISIL group had forced hundreds of families to relocate to Mosul from nearby villages, part of an “apparent policy of preventing civilians from escaping”.

Fighting has forced 5,640 people to flee their homes so far from the vicinity of the city, the International Organization for Migration said.

“All those who are participating in the battle have to respect the humanitarian principles and refrain from seeking vengeance,” said a sermon delivered in Sistani’s name by one of his representatives in Kerbala.

On Thursday, Iraq’s government said its soldiers advanced from the south and east, while Kurdish Peshmerga fighters moved in from the north and east on the country’s second-largest city, now under ISIL’s control. 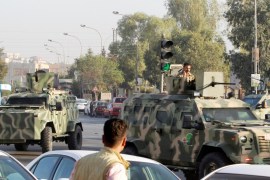 ISIL claims responsibility for deadly attacks targeting buildings and a power station in and around oil-rich city. 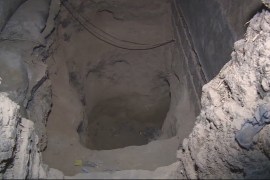 Tunnelling under an ISIL commander’s house