After a two-year manhunt, authorities in Mexico have detained a fugitive police chief seen as a key figure in the 2014 disappearance of dozens of missing students.

The announcement is a major development in a probe into the disappearance of 43 students from Ayotzinapa teachers’ college on the night of September 26, 2014 – a case that prompted national protests and international condemnation.

According to investigators, police in Iguala attacked the students after they “commandeered” buses to transport them to a rally in Mexico City the next day – an annual tradition which had in the past been tolerated by authorities.

Six people, three of them students, were killed in the attack.

The remains of another student were identified among ashes and bone fragments found in a river nearby. The fate of the remaining 42 students is still unknown.

Authorities initially concluded they had been killed and their bodies burned at a nearby rubbish dump. But independent international investigations have discredited this version of events and the case remains open.

An independent probe implicated Flores in the disappearance, and Attorney General Arely Gomez said the ex-police chief’s testimony will be key to discovering the students’ fate.

The disappearance of the students sparked nationwide outrage over what many call a culture of impunity and corruption, and has led to calls for the resignation of President Enrique Pena Nieto. 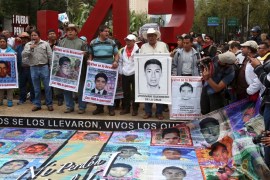 Officers may have been involved in the abduction and murder of 43 students two years ago, says human rights official. 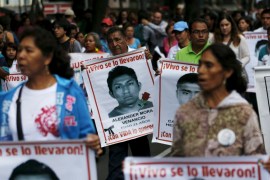