Security forces in Iraq are battling for a second day with ISIL gunmen who attacked the northern city of Kirkuk, after an assault that appeared aimed at diverting attention away from a major military push to retake Mosul, the armed group’s last remaining stronghold in the country.

“There is still ongoing fighting in certain areas of Kirkuk; this has been going on for more than 24 hours,” Al Jazeera’s Hoda Abdel-Hamid, reporting from outside the city, said on Saturday morning.

“We were told yesterday night that the situation was nearly brought under control, as per one of the Peshmerga commanders; it appears that this morning more ISIL fighters have popped up and there’s still intensive exchange of gunfire going on.”

Inside Mosul: ‘We fear for our lives’

Military commanders believe the assault on Kirkuk was an effort to create a diversion from the offensive on Mosul, 175km further north, which has been held by ISIL – also known as the Islamic State of Iraq and the Levant or ISIS – since 2014.

“In some ways, it [the diversion] did succeed because some of the forces that were sent to Kirkuk yesterday and overnight – whether they were Peshmerga or Iraqi forces – had actually to pull out from the different frontlines and come over here as reinforcements,” our correspondent said.

Further north, allied forces pressed forward in their six-day ground and air operation to recapture Mosul, recovering outlying territory before the big push into the city itself.

An estimated 30,000 fighters, including the Iraqi army, Kurdish Peshmerga, Sunni tribal fighters and the Popular Mobilisation Forces – Shia militias that now have official status from Baghdad – are taking part in the campaign, which is backed by US-led coalition air strikes.

More than 5,000 US soldiers are also deployed in support missions, as are troops from France, Britain, Canada and other Western nations.

In contrast, Iraqi commanders have told Al Jazeera than an estimated 6,000 ISIL fighters are inside Mosul.

“We’ve been seeing a very difficult fight, but we have to remember that ISIL is outnumbered by the thousands of troops which are taking part in this offensive,” Khodr said.

“But ISIL puts up a fight; they lay the ground with booby traps, improvised explosive devices and they also use suicide car bombers. So it makes it difficult for these advancing troops to move forward, they have to fight their way through … and as they enter Mosul, of course, it’s going to be a very difficult battle.”

The advance on Hamdaniya came as Ash Carter, the US secretary of defence, arrived on unannounced visit to Iraq’s capital Baghdad on Saturday to get an assessment of the Mosul operation.

Carter is due to meet Iraqi Prime Minister Haider al-Abadi and is also expected to discuss Baghdad’s objections to Turkish involvement in the unfolding offensive.

His visit comes a day after signalling US support for a potential role for Turkish forces in the Mosul push – a major source of tension between Baghdad and Ankara.

Following talks with Turkish President Recep Tayyip Erdogan, Carter said on Friday the two neighbouring countries had reached a provisional agreement over Turkish involvement in the offensive, but the details still needed to be worked out.

“Iraq understands that Turkey as a member of the counter-ISIL coalition will play a role in counter-ISIL operations in Iraq and secondly that Turkey since it neighbours the region of Mosul has an interest (in) the ultimate outcome in Mosul,” Carter told reporters.

“That will have to obviously be something that the Iraqi government will need to agree to and I think there’s agreement there in principle.”

Erdogan has previously voiced frustration that NATO member Turkey has not been more involved in the assault on the Iraqi city, once part of the Ottoman empire and still seen by Ankara as firmly within its sphere of influence.

The Turkish president has also warned of sectarian bloodshed if the Iraqi army relies on Shia militias to retake Mosul, a predominantly Sunni city.

READ MORE: We have a historical responsibility in Iraq, says Erdogan

Iraq, meanwhile, views Turkish military moves on its territory with apprehension, and any agreement on Mosul would defuse a major source of tension between the neighbours.

The two countries have also been locked in a row over the presence of Turkish troops at the Bashiqa camp near Mosul, where Turkey has trained thousands of forces.

The offensive that started on Monday to capture Mosul is expected to become the biggest battle fought in Iraq since the US-led invasion in 2003.

According to the UN, Mosul could require the biggest humanitarian relief operation in the world, with worst-case scenario forecasts of up to a million people being uprooted.

About 1.5 million residents are still believed to be inside Mosul.

On Friday, the United Nations also warned that ISIL fighters in Mosul may also be preparing to use civilians as human shields – or simply kill them.

Zeid Ra’ad al-Hussein, the UN human rights chief, said his office had reports that civilians were being held close to ISIL positions in Mosul, possibly as a buffer against advancing Iraqi forces.

“There is a grave danger that ISIL fighters will not only use such vulnerable people as human shields, but may opt to kill them rather than see them liberated,” Zeid said in a statement. 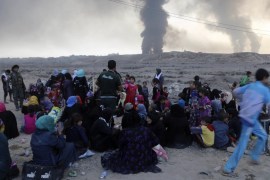 Mosul: ISIL may use civilians as human shields, says UN

At least 550 families forced to walk to Mosul by ISIL fighters as Iraqi forces intensify offensive. 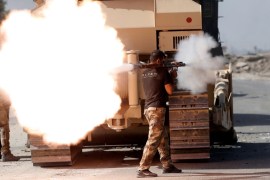 Fourth day of battle to retake ISIL stronghold sees entrance of Iraqi special forces and an advance from the northeast. 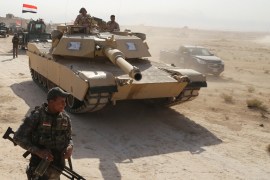 Fight for Mosul rages as Iraqi forces push on

Battles intensify around Iraq’s second-largest city with the town of Hamdaniya targeted for ISIL’s expulsion.