A US Navy warship on Friday passed through waters claimed by China near disputed islands in the South China Sea – a move that Beijing called “illegal” and “provocative”.

Navy Commander Gary Ross said the destroyer USS Decatur conducted the transit operation near the Paracel Islands. He said it was done “in a routine, lawful manner without ship escorts and without incident”.

China’s Defence Ministry said two Chinese vessels warned the US warship to leave during a patrol. In a statement on its website, it added the Chinese military would increase air and sea patrols in the area.

The Paracels, a group of islands and reefs, are occupied by China but are also claimed by Vietnam and Taiwan.

The US Navy has now conducted four so-called freedom-of-navigation operations in the past year in the South China Sea, where China has reclaimed land to assert its claim to disputed features – mostly in the Spratly islands that lie further south.

China has looked dimly upon the US operations, which it views as meddling in waters where the United States does not have territorial claims.

Friday’s operation comes a day after the leader of the Philippines, one of the six governments with claims in the South China Sea, announced during a visit to Beijing his nation’s “separation” from the US, as it seeks to deepen ties with China.

Ross said the operation was unrelated to any such event.

He said the US conducts these operations on a regular basis around the world. He said the move “demonstrated that coastal states may not unlawfully restrict the navigation rights, freedoms and lawful uses of the sea”, which all states are entitled to exercise under international law.

“This operation was about challenging excessive maritime claims, not territorial claims to land features. The United States has been clear that we take no position on competing territorial sovereignty claims to naturally formed land features in the South China Sea,” said Ross. 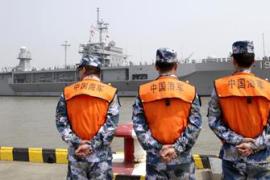