Typhoon Haima made landfall on the coast of China, about 110km to the east of Hong Kong, at 04:00 GMT. It was a typhoon equivalent to Category 1 on the Saffir Simpson Scale as it came ashore almost over the top of Shanwei.

The eye was no longer open but the wall of thunderstorms circulating around the centre almost reached Hong Kong. Even at this distance, Hong Kong suffered gusts of up to 109km/h.

More than 700 flights in and out of Hong Kong were cancelled or delayed, roads were clear of cars and pavements empty, with schools and offices shut, according to AFP news agency.

Hong Kong Observatory warned: “The rain bands of Haima are bringing squalls and heavy rain to the territory. Seas are rough and there are swells. Members of the public should stay on alert, stay away from the shoreline, and not engage in water sports.”

Shanwei felt the wind swing from northeast to southwest as it gusted to 94km/h then settled to a steady 61km/h as the rain kept falling. Some 66mm had fallen by 06:00 GMT.

Around 150km further east, the coastal city of Shantou was recording gusts of wind in excess of 80km/h in the driving rain. At least 71mm of rain has fallen in the past nine hours.

Haima is now overland in eastern Guangdong so has lost its source of energy – the warm waters of the South China Sea. As such it will now disintegrate, but it will still drop around 200mm of rain over eastern Guangdong and Fujian. Floods and landslides are likely. 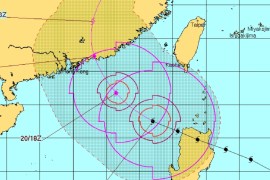 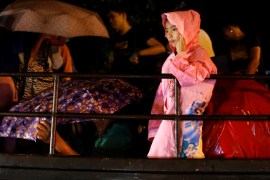 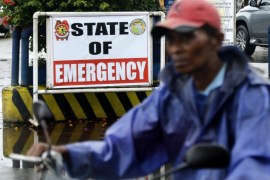