About 100 Turkish rockets pounded a group of Kurdish fighters allied with a US-backed militia in northern Syria on Friday as Ankara’s attacks against Syrian Kurds continue to intensify.

The confrontation between Turkey-backed Syrian rebels and Kurdish forces fighting the Islamic State of Iraq and the Levant has escalated as both sides race to be the first to expel the armed group from the northern Syrian city of al-Bab.

The UK-based Syrian Observatory for Human Rights said nearly 100 rockets fired by Turkish forces hit the town of Sheikh Issa and other frontline areas in northern Aleppo province on Friday.

On Wednesday, Turkey launched dozens of air strikes on the American-backed Kurdish fighters, highlighting the conflicting agendas of NATO members Ankara and Washington in an increasingly complex battlefield.

Turkey said between 160-200 Kurds were killed in the strikes, but a war monitor said only nine died.

Turkish Prime Minister Binali Yildirim said on Friday Turkey’s activities in Syria are aimed at destroying “terrorist organisations” and securing its border, adding all operations are discussed with coalition partners.

An adviser to the Turkey-backed Free Syrian Army (FSA), who gave his name as Osama Abu Zayd, told Reuters news agency that Friday’s clashes were fierce and widening as they try to push Kurdish fighters out of the northern Aleppo countryside.

“Two days ago, the [Kurdish fighters] tried to exploit our battle against Daesh [ISIL] to advance towards Marea,” Abu Zayd said. Marea is a town in Turkey-backed rebel territory on the way to al-Bab.

“What is happening today is a natural response to these separatist groups,” Abu Zayd added.

Ahmad Araj – a political representative for the Kurdish fighters allied to the US-backed Syrian Democratic Forces (SDF) militia – said fighters were now under attack both from ISIL and Turkey.

He said more than 150 rockets on Friday hit areas from which they had pushed ISIL out this week.

“Today at 10am, Turkish shelling began … There was an attack and the clashes have continued since morning,” said Araj. “Their rockets are not targeting Islamic State, rather they are targeting our forces in areas liberated [from ISIL].”

The United States has backed the Kurdish-led SDF in its fight against ISIL, angering Turkey, which sees the umbrella group’s dominant YPG militia (People’s Protection Units) – as an extension of Kurdish PKK fighters. The PKK has waged a three-decade conflict in southeastern Turkey.

Turkey, a major backer of the fight against Syrian President Bashar al-Assad, entered the Syrian conflict in August, using artillery and air power to help FSA rebels take ISIL-held territory near the border.

But it fears the YPG will try to connect three de facto autonomous Kurdish cantons that have emerged during the five-year war to create a Kurdish-run enclave in northern Syria, stoking separatist ambitions of Kurds on its own soil. 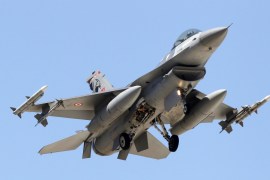