Iraqi forces launched a third front in the offensive to take back Mosul but ISIL fighters put up stiff resistance, unleashing a wave of vehicle-borne suicide bombers while leaving a deadly trail of hidden explosive devices.

Iraq’s government said on Thursday its soldiers advanced from the south and east, while Kurdish Peshmerga fighters moved in from the north and east on the country’s second-largest city, now under control of Islamic State of Iraq and the Levant, also known as ISIS.

“After we break them in Bartella, everywhere else they will crumble,” said Major-General Fadhil Barwari.

He said ISIL had few defences in the town, which was almost completely empty of civilians. “They just left some snipers and suicide car bombs.”

ISIL fighters drove at least nine suicide car and truck bombs against the advancing troops, eight of which were destroyed before reaching their targets, while the ninth struck an armoured Humvee, Lieutenant-Colonel Muntadhar al-Shimmari told the Associated Press news agency.

The deadly defence offered a glimpse at what Iraqi forces can expect as they approach ISIL’s biggest urban bastion.

Al Jazeera’s Imran Khan, reporting from Erbil, said as of 21:00 GMT on Thursday Bartella remained in the hands of ISIL and the fighting continued.

He reported that the area of Bashiqa, northeast of Mosul, also remained besieged and Iraqi forces were fighting to take villages surrounding it.

“This is a very tough fight,” Khan said. “They need to push through in order to open up a road that takes them 10km into Mosul via the highway. The battle is continuing and they are getting very close towards Mosul.”

The US military announced the first American death since the operation began. The US soldier died on Thursday from wounds sustained in a roadside bomb explosion in northern Iraq, though the army did not specify where.

In the areas surrounding Mosul, Iraqi troops can benefit from the use of air power and artillery. The fight will be different once they enter the city, where most of the civilian population is concentrated, Khan reported.

“The closer you get to Mosul is where the civilians really are, and that’s going to be a real challenge for both the Kurdish and the Iraqi security forces.”

The offensive is the largest operation launched by Iraqi forces since the 2003 US-led invasion.

Tens of thousands of troops are involved, while there are thought to be nearly 6,000 ISIL fighters in and around Mosul. It is expected to take weeks, if not months, before Mosul falls.

Amer al-Jabbar, a 30-year-old soldier with the Iraqi special forces, said he was happy to be taking part in the attack and hoped to avenge two brothers killed while fighting.

ISIL captured Mosul during a lightning-quick advance across northern Iraq in 2014, and its leader Abu Bakr al-Baghdadi announced the formation of a self-styled caliphate from the pulpit of a Mosul mosque.

Mosul is the largest city controlled by the armed group and its last major urban centre in Iraq.

It is believed 1.5 million people have remained in the city, and the United Nations warned that as many as one million people could flee in the coming days, creating a serious humanitarian crisis. 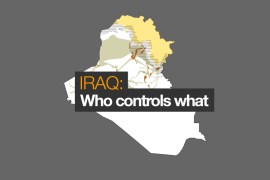 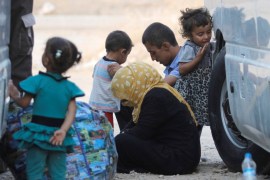 Mosul battle could cause a ‘human catastrophe’

Al Jazeera speaks to a resident trapped with his young family as battle to retake the city enters its fifth day. 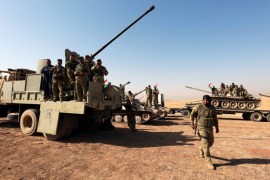