President Rodrigo Duterte has backtracked on his comments about the Philippines’ “separation” from the United States, saying severing of ties was not in the best interest of his country.

Following a meeting between Duterte and his Chinese counterpart Xi Jinping at the Great Hall of the People in Beijing on Thursday, the tough-talking president announced “separation from the United States, both in military but economics also”.

“America has lost it,” Duterte was quoted as saying in a transcript of his speech released by the Philippine Presidential Communications Office on Friday.

“I mean, I realigned myself in your ideological flow and maybe I will also go to Russia to talk to [President Vladimir] Putin and tell him that there are three of us against the world: China, Philippines and Russia.”

However, following his return from China on Friday, he announced that the statement meant Philippines’ foreign policy “need not dovetail” with that of the US.

“It’s not severance of ties. Severance is to cut diplomatic relations. I cannot do that. Why? It’s in the best interests of my country that I don’t do that,” Duterte said in his hometown of Davao.

In response, the White House said Duterte has made too many troubling statements recently that lend uncertainty over its ties with the US and are at odds with their alliance.

“And the frequency of that rhetoric has added an element of unnecessary uncertainty into our relationship that doesn’t advance the interests of either country.”

Duterte has also repeated his denunciation of Obama on Thursday as a “son of a whore”. 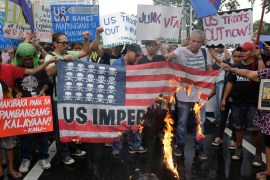