When Hillary Clinton and Donald Trump debated the topic of the Supreme Court in their third and final debate, they outlined their vision for the future of the country well beyond the next presidential term.

Trump said he would appoint justices who would block restrictions on gun ownership and do away with federal abortion rights, returning the issue of abortion to each individual state.

Clinton said she would appoint justices who would reverse a past court decision allowing corporations to spend unlimited amounts on elections.

She also urged the US Senate to act immediately to fill the Supreme Court’s current vacancy.

When a US Supreme Court justice dies or retires, the president typically nominates a replacement and the Senate swiftly votes on the choice.

But after conservative Justice Antonin Scalia’s death in February, Senate Republicans refused to consider President Barack Obama’s selection, insisting that the next Supreme Court justice should be chosen by the next president.

This has made the Supreme Court one of the most important issues of the 2016 presidential election.

Not only does the court make important decisions on policy, but the upcoming lifetime appointment comes at a rare moment when the ideological makeup of the court hangs in the balance.

“The Supreme Court should always be more of an election issue, because the appointment of federal justices is the most lasting legacy of any president,” says Ilya Shapiro, senior fellow in constitutional studies at the Cato Institute.

“This year we have the unique occurrence of a Supreme Court justice’s death during the election year.”

WATCH: What does the campaign reveal about US politics?

Since Scalia’s death, the remaining eight justices have been evenly divided between four liberal justices and four conservative justices.

The next president will have the opportunity to fill Scalia’s seat and possibly more, if one of the court’s several elderly justices chooses to retire. Currently, two justices are over the age of 80.

According to Shapiro, “Clinton has said she would appoint justices that would preserve the right to abortion and overturn certain freedom of political speech regarding campaign finance … Basically this is a progressive theory of the law that the constitution evolves and that you need to look to more than just the text of the words on the page when interpreting the law.”

Shapiro says Trump took the step of naming 21 people he would consider as justices in order to reassure Republican Party elites that he would name conservatives to the Supreme Court.

The Supreme Court’s approach to these issues will vary greatly depending on whether Clinton is elected and the court is given its first liberal majority since 1969, or if Trump is elected and a conservative majority is restored.

The two candidates have had starkly different approaches to the appointment of Supreme Court justices during their campaigns.

While Trump has provided a list of potential nominees, Clinton has refrained. She has, instead, connected the nomination of justices to issues such as reproductive rights and whether the US constitution protects corporations’ political spending as free speech.

Conservatives are generally enthusiastic about the names on the list, according to Shapiro, “but many people are wondering how much they can trust the list”.

Republican Senator John McCain said on Monday that his party would block all court nominations if Clinton wins the election, raising the possibility that the Supreme Court might be forced to operate without a full bench indefinitely.

The current, evenly split justices have been unable to decide some cases, such as a recent one challenging Obama’s immigration initiatives aimed at providing deportation relief to undocumented families.

“The inability of the Court to render a majority decision impacts millions of families now,” Zwarensteyn says.

“There are numerous other issues that the Court is reluctant to take up because it does not have the ability to cast a decisive fifth vote.”

Possible future cases should concern American voters as much as issues currently before the Supreme Court, according to Shapiro.

“Issues regarding executive power, immigration, the scope of federal power over regulatory agencies, the use of race in various contexts, transgender rights, employment discrimination law, religious liberty … there’s a lot of different things that could come up in the future.” 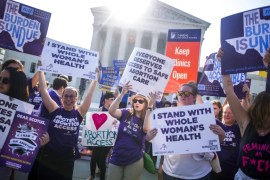 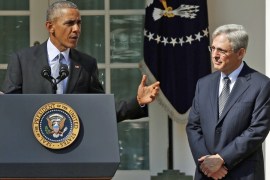 As a former prosecutor, Garland supervised both the Oklahoma City bombing and Unabomber cases in the US.