Typhoon Haima survived its encounter with the Philippines but lost a lot of its power to Mount Sicapoo, the highest peak in the Solsona Mountain Ranges located in the country’s northern Luzon island.

The eyewall of Haima crossed the eastern beaches of Isabela province by 17:00 GMT on Wednesday. It went over the top of Tuguegarao and the River Cagayan within an hour, smashed into the mountains to the west and emerged to the south of the city of Laoag before midnight GMT.

The typhoon eye spent a little over six hours over Luzon. It left 368mm of rain in Baguio, the “summer capital of the Philippines” and a city around 250km south of the typhoon’s track.

The wind in Teguegarao gusted to over 90 kilometres per hour for four hours, at first from the north, then from the south. The highest gust was 108km/h.

Cagayan’s provincial government said it was possible that “100 percent of the houses in Tuguegarao City were either partially or fully damaged by Super Typhoon Lawin”, the local name for Haima.

The final big gust from Typhoon Haima was felt in the city of Laoag and recorded at 112km/h. At this time, Haima was still a typhoon equivalent to a Category 2 on the Saffir-Simpson Scale.

Conditions within the atmosphere are no longer conducive to typhoon development, so around the now-ragged eye of Haima, the winds will slowly decline.

Even so, it is expected to be a Category 1 typhoon by its next landfall on the Chinese mainland.

Hong Kong is already suffering flooding from the flailing thundery arms of Typhoon Sarika. Hong Kong’s neighbour, Shenzhen, has received 224mm of rain in the past two days alone.

The forecast track for Typhoon Haima curves slowly to the right, predicting landfall to the east of Hong Kong by 150km. The target city of the eye is Shanwei with landfall at 06:00 GMT Friday.

Some wind damage and widespread flooding is the likely result for eastern Guangdong. Waves are still being driven up to a height of eight metres and with an additional one-to-two metre storm surge, some coastal inundation is likely. 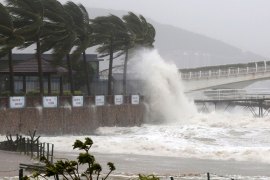 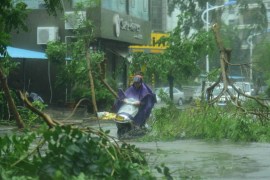 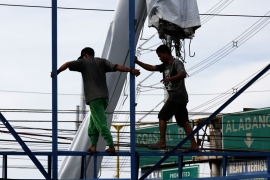