Turkish police have arrested a brother of Fethullah Gulen, US-based religious leader accused by the government of plotting the failed July coup attempt .

Kutbettin Gulen was arrested by police acting on a tip-off at the home of a relative in the Gaziemir district of the western Izmir province, the state-run Anadolu news agency said.

He is the first of Gulen’s siblings to be arrested after the coup bid.

He is accused of “membership of an armed terror group”, Anadolu said, without giving further details.

Anadolu said books belonging to Fethullah Gulen himself were confiscated in the police raid.

Kutbettin Gulen was dismissed from a printing house operating under Kaynak Holding after the state-appointed trustees to the company in 2015 for its links to Gulen’s organisation, according to Turkish media.

Fethullah Gulen, who has lived in self-imposed exile in the United States since 1999, is accused by Turkey of orchestrating the July 15 coup plot.

According to previous Turkish media reports, Gulen has three living brothers, Mesih, Salih and Kutbettin, as well as two who are dead, Seyfullah and Hasbi.

He also has two sisters, Nurhayat and Fazilet. Their current whereabouts are not known.

In July, the authorities arrested Gulen’s nephew Muhammet Sait Gulen in the eastern city of Erzurum. Another nephew, Ahmet Ramiz Gulen, was arrested in August in the southeastern city of Gaziantep.

But this is believed to be the first time a brother has been detained.

Turkey’s government, which had a close alliance with Gulen in the early years of its rule, say his supporters infiltrated all sectors of society including the military with the aim of launching the coup that took place on July 15.

The coup attempt  was defeated when supporters of President Recep Tayyip Erdogan took to the streets.

But the state of emergency after the coup has raised tensions between Turkey and the European Union, which has expressed concerns over the scale of the crackdown that  has seen 32,000 people arrested  .

Since the failed coup attempt, more than 77,000 people, including soldiers, judges and prosecutors, have been investigated, some of them temporarily detained.

Thousands of soldiers, teachers, journalists, civil servants and academics have also been suspended or dismissed from their jobs as a result of their alleged links to Gulen’s network.

Turkish government also  shut down  thousands of schools, companies, television channels and newspapers for their alleged links to “terrorism” since the failed coup attempt.

Erdogan said this week that  the state of emergency imposed after the coup attempt should be extended  at least for another three months when it expires in October. 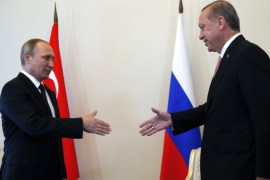 Can Turkey and Russia be allies?

Ties between the two countries have been strained since Turkey shot down a Russian fighter jet last November.