Russia has announced plans for an eight-hour “humanitarian” ceasefire in Aleppo later this week, amid a warning from the European Union that the Syrian government’s assault on the city could amount to war crimes.

The United Nations and the EU welcomed Tuesday’s announcement by Russia, but said the planned pause in fighting – set to take place on Thursday –  needed to be longer to allow the delivery of humanitarian aid.

“We have taken a decision not to waste time and to introduce ‘humanitarian pauses’, mainly for the free passage of civilians, evacuation of the sick and wounded and withdrawal of fighters,” Sergei Rudskoi, a senior Russian military officer, said in Moscow.

“During this period the Russian air force and Syrian government troops will halt air strikes and firing from any other types of weapons.”

Russia announced on Tuesday that both Russian and Syrian government jets had stopped their bombing of Aleppo’s rebel-held east at 10am local time (07:00 GMT) in anticipation of Thursday’s temporary truce.

However, Russian and Syrian forces have only escalated their aerial and ground assault on the rebel-held areas in recent weeks.

A 48-hour or 72-hour ceasefire “will require some sort of mutual arrangement”, he said.

The announcement came as EU foreign ministers condemned the deadly air war waged on Aleppo over the past three weeks.

“Since the beginning of the offensive by the regime and its allies, notably Russia, the intensity and scale of the aerial bombardment of eastern Aleppo is clearly disproportionate,” an EU statement said.

“The deliberate targeting of hospitals, medical personnel, schools and essential infrastructure, as well as the use of barrel bombs, cluster bombs and chemical weapons, constitute a catastrophic escalation of the conflict … and may amount to war crimes.”

The EU ministers said that they would press ahead with extending sanctions against Syrian President Bashar al-Assad’s government, but stopped short of threatening measures against Russia.

“It can be a start … for sure it is a positive step,” she said at the close of the ministerial meeting in Luxembourg.

“The latest assessment from the aid agencies [however] is that 12 hours is needed so work is needed to find common ground.”

Stephane Dujarric, UN spokesman, also welcomed the truce announcement but stressed the “need for a longer pause in order to get the aid in”.

Once Syria’s thriving commercial hub, Aleppo has been ravaged by air raids and intensifying clashes as pro-government forces fight to capture the rebel-held east.

Russian air support for the onslaught – which has destroyed hospitals and other civilian infrastructure – has spurred the accusations of potential war crimes.

Monday’s air strikes killed 14 civilians in Aleppo’s rebel-held district of Marjeh, including at least 12 members of the same family, according to the UK-based Syrian Observatory for Human Rights.

“Nine of the family members were minors, including a 17-year-old girl and her newborn,” said Rami Abdelrahman, head of the Britain-based group.

Unverified online video footage showed the bodies of eight children said to have been killed in Marjeh, wrapped in white cloth and lined up before their burial.

READ MORE: No easy answers for Syrian students in Lebanon

At least 47 people have been killed since Sunday morning in east Aleppo, the Syrian Observatory said.

The deadliest raids were overnight on a residential block in Qaterji, where the observatory said Russian strikes killed 18 civilians.

“There are still families under the ruins. We pulled out seven or eight bodies and dozens of wounded,” said ambulance driver Abu Mohamed.

“The hospitals are full of casualties. It’s a disaster.”

More than 430 people have been killed in bombardment on the eastern half since the government announced its offensive to retake Aleppo on September 22, the observatory said.

Another 82 people have died in rebel fire on government-held neighbourhoods in the west.

Further west in Aleppo province, Russian raids killed 23 people in the village of Uwaijal on Monday, said the Syrian Observatory. 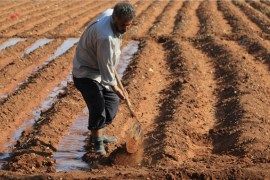 Can urban agriculture help to save east Aleppo?

As conditions worsen, one local farm is trying to feed besieged residents, one crop at a time.