Air strikes have killed at least 14 people from one family in rebel-held Aleppo in northern Syria, bringing the death toll to 47 over the past 24 hours.

Members of the Syrian Civil Defence, a search and rescue group also known as the White Helmets that operates in rebel-held areas across the country, say they are searching for more than a dozen people trapped under the rubble.

“A new massacre happened this morning when Russian warplanes bombed the Marjeh neighbourhood killing 14 people from the same family, most of them women and children,” Ibrahim Abu Leith, Aleppo-based spokesman for the White Helmets, told Al Jazeera on Monday.

The UK-based Syrian Observatory for Human Rights said that five children were among the dead.

Of the 47 civilians killed, the highest number of dead were in the Qaterji neighbourhood, where Russian raids claimed 17 lives overnight, according to Rami Abdulrahman, the Syrian Observatory chief.

White Helmets rescuers were working to pull about 20 people out of the rubble in Qaterji.

One civil defence volunteer told AFP news agency that they had been unable to complete rescue missions overnight in fear of further air strikes by warplanes circling above.

The Russian-backed offensive to capture rebel-held eastern Aleppo has killed several hundred people since it got under way last month after the collapse of a truce brokered by Russia and the US.

The Syrian Observatory said it had documented the deaths of 448 people in air strikes in eastern Aleppo since then, including 82 children.

The Syrian and Russian military leaders say they only target “terrorists”.

As bombs continued to fall on Syria’s second city, diplomats from the United States and Britain acknowledged the western world’s weak support for military action against the Syrian government as they seek ways to pressure Bashar al-Assad and his principle backer, Russia, to halt the deadly offensive on Aleppo.

After a meeting of 11 governments opposing Assad’s rule, John Kerry, the US secretary of state, and his UK counterpart Boris Johnson insisted on Sunday that all options were on the table.

But stark explanations about the danger of resorting to military force appeared to rule out the possibility of military intervention.

“When a great power is involved in a fight like this, as Russia has chosen to be by going there and then putting its missiles in place in order to threaten people against military action, it raises the stakes of confrontation,” Kerry said after the meeting in London.

He said no one should be “lighting a fire” under a larger sectarian war in the Middle East or one drawing in superpowers against one another.

Johnson said Britain wanted to “ratchet up” pressure on Assad, Russia and Iran.

“No option is, in principle, off the table,” he said.

Johnson said there should be “no doubt” that these so-called military options are extremely difficult and there is a lack of political appetite in most European capitals and certainly in the West for that kind of solution at present.

The gathering in London came amid mounting international frustration with the conflict, now well into its sixth year, which has killed as many as a half-million people, caused Europe’s worst refugee crisis since the World War II and enabled the rise of the Islamic State of Iraq and the Levant (ISIL) group.

Kerry on Saturday launched a new diplomatic process with what he described as the major international players in the war – the US, Russia, Saudi Arabia, Iran, Turkey, Qatar, Jordan, Iraq and Egypt.

The US has also expressed scepticism about the chances of a diplomatic agreement with Assad’s military supporters, Russia and Iran.

Kerry tried to keep the threat of military action alive on Sunday, although President Barack Obama has consistently rejected military action against Assad and is not likely to approve any US military intervention before leaving office.

“Let me make it clear,” he said, “President Obama has not taken any options off the table at this point in time. So we’ll see where we are in the next few days in the context of the discussions we’re having.” 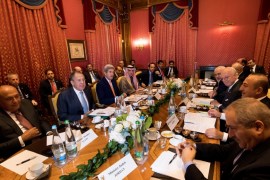 US secretary of state says “we’re not letting any grass grow under our feet”, a day after collapse of talks in Lausanne. 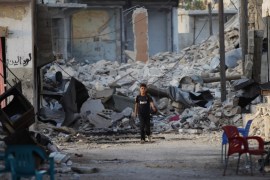 US and Russia are joined in Lausanne by UN and Middle East powers on different sides of the five-year conflict.