Rescue teams have recovered at least 32 bodies as they intensify search operations following the sinking of an overloaded ferry sank in central Myanmar.

A total of 154 people were rescued alive after the ferry sank early Saturday on the Chindwin River, about 72km north of the city of Monywa.

But rescuers have found only bloated corpses floating in the water since then, and fear the death toll could reach 100 once they raise the boat from the riverbed.

“So far we have recovered 32 dead bodies,” Sa Willy Frient, director of the local relief and resettlement department who is overseeing the operation, told AFP news agency on Sunday.

“We are trying to raise the boat using a crane after tying it with strong ropes. After we lift it out, the death toll will be higher.”

He estimated up to 250 people – around 100 more than the boat’s capacity – were on board, along with heavy cargo.

Survivor Hnin Lei Yee, a 27-year-old schoolteacher, was travelling with her husband and one-year-old daughter to celebrate the Buddhist Thadingyut festival with her family.

Her baby was killed in the disaster. She still does not know her husband’s fate.

“It happened very fast,” she told AFP. “The window was open so I had a chance to get out of the boat.”

“I cannot swim so I had to hold on to a plastic float and finally the rescue boat came to save my life.”

“In the morning, I heard there was a dead child in the hospital and I went there. I saw my daughter dead,” she said, weeping.

Some 30 teachers were thought to be among the passengers, along with dozens of students from Monywa University and workers heading home for Thadingyut.

Four of the boat’s staff have been arrested and will face legal action. Authorities are still hunting for one crew member and the ferry’s owner.

READ MORE: Myanmar – Hydropower and the cost of life

At least 21 people, including nine children, died in April after a boat capsized off the coast of Myanmar’s western state of Rakhine.

In March last year, at least 52 people lost their lives off the west coast when an overloaded ferry sank in rough waters. 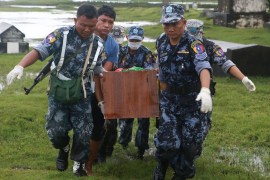