Three police officers have been killed by an explosion in Turkey’s southeastern city of Gaziantep, according to the city’s governor.

The blast was thought to have been caused by a suicide bomber detonating explosives during a police raid on Sunday on a suspected Islamic State of Iraq and the Levant (ISIL, also known as ISIS) safehouse.

Gaziantep Governor Ali Yerlikaya said that eight people, four of them of Syrian origin, were wounded in the explosion.

“Security forces located the Daesh safehouse while they were investigating this tip,” he said, using an Arabic acronym for ISIL.

Later on Sunday, police teams conducted another raid in a separate area of Gaziantep as they suspected a link between an apartment there and the ISIL safehouse, according to Turkey’s private DHA news agency.

In the raid, another explosion occurred as a suspected ISIL suicide bomber blew himself up.

The second bomber, believed to be the leader of the alleged local ISIL cell, was the sole victim, according to DHA. His wife and two children were taken into custody.

Dabiq has symbolic importance to ISIL because of a prophecy that states it will be the site of an end-of-times battle between Christian forces and Muslims.

Turkey launched an unprecedented operation inside Syria on August 24, backing up opposition fighters, with an ultimate goal of cleansing its border from ISIL and stop the advance of Syrian Kurdish militia forces which Ankara vehemently opposes.

President Recep Tayyip Erdogan has also expressed Turkey’s willingness to get involved in a coalition operation to recapture the key Iraqi city of Mosul from ISIL.

Turkey is still reeling from a failed coup blamed on US-based cleric Fethullah Gulen that has been followed by a purge of his supporters from all state institutions.

Southeastern Turkey has been hit by several deadly blasts over the past year, linked either to ISIL or the Kurdistan Workers’ Party (PKK), an armed group fighting for Kurdish authonomy, outlawed in Turkey.

More than 50 people have been killed and scores more wounded in a suicide attack at a Kurdish wedding ceremony in Gaziantep in August.

The Turkish government blamed the attack on ISIL, even though the group did not officially claim responsibility.

Three suspected ISIL suicide bombers killed 44 people at Istanbul’s main Ataturk Airport in July, the deadliest in a string of attacks in Turkey this year.

Almost 40 people were killed in a suicide bomb attack in Ankara in March that was claimed by a Kurdish separatist group.

And at least 28 people were killed and 61 more wounded in a large explosion targeting a military vehicle once again in Ankara in February.

Violence flared up in the largely Kurdish southeast in the month, with bomb attacks killing mostly police and soldiers, in an escalation that officials blamed on the PKK. 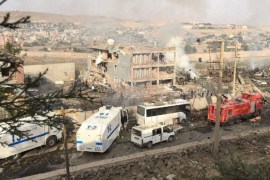 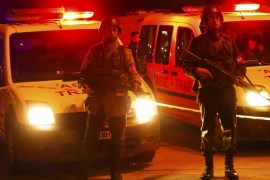