Israel suspended cooperation with UNESCO on Friday, a day after the UN cultural body criticised it for restricting Muslim access to the site, and for aggression by Israeli police and soldiers. UNESCO also recognised Israel as the occupying power.

In a statement sent to Al Jazeera, the Palestinian Ministry of Foreign Affairs said it welcomed the adoption of the resolution that reflected “the majority of member states commitment to confront [the Israeli] impunity and uphold the principles upon which the UNESCO was founded”.

The statement added: “Rather than spending millions to spin the illegal colonisation into normalcy and distort reality, Israel, the occupying power, must understand that the only way to be treated like a normal state is if it starts acting like one by ending its occupation of Palestine and seizing its irresponsible and illegal actions in the occupied land of the state of Palestine, especially East Jerusalem.”

In response, Maliki said Bokova had “outstepped the scope of her mandate” and described her declaration as “completely unacceptable”.

Israel and the US denounced the UNESCO resolution, which was submitted by Algeria, Egypt, Lebanon, Morocco, Oman, Qatar and Sudan – and passed with 24 votes in favour, six against, and 26 abstentions.

“We commend the vote at the UNESCO that denied any historic claims between Jews and the Al-Aqsa Mosque and its Western Wall,” Izzat al-Risheq, spokesman for Hamas, said in a statement sent to Al Jazeera.

“We also appreciate all the countries that have sponsored and voted in favour of this resolution.”

Jewish groups refer to the site as the “Temple Mount” and their increased incursions into the mosque compound have continuously led to Palestinian protests across the occupied West Bank, including East Jerusalem and the Gaza Strip. 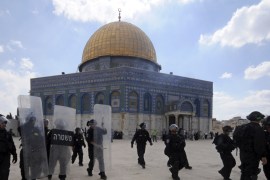 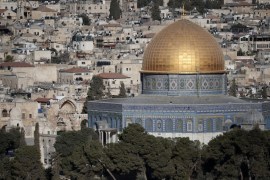