Israel has suspended cooperation with UNESCO a day after the UN cultural body passed a resolution that sharply criticised Israeli policies around al-Aqsa Mosque compound, while supposedly rejecting Jewish ties to the holy site in occupied East Jerusalem.

The resolution condemned Israel for restricting Muslims access to the site, and for aggression by police and soldiers. It also recognised Israel as the occupying power.

“This is an important message to Israel that it must end its occupation and recognise the Palestinian state and Jerusalem as its capital with its sacred Muslim and Christian sites,” said Nabil Abu Rudeineh, a spokesman for Palestinian President Mahmoud Abbas.

The status of Jerusalem is one of the thorniest issues of the decades-long Palestinian struggle for independence.

Jewish groups refer to the site as the “Temple Mount” and their increased incursions into the mosque compound have continuously led to Palestinian protests across the occupied West Bank, including East Jerusalem, and the Gaza Strip.

Israel and the US denounced the UNESCO resolution.

“Israel is furious about this resolution by UNESCO because it essentially nullifies any Jewish connection to the al-Aqsa Mosque compound,” said Al Jazeera’s Bernard Smith, reporting from the occupied East Jerusalem.

“The resolution does assert Jerusalem is holy to the three monotheistic religions – Judaism, Islam and Christianity – but there is a special section in the resolution that says al-Aqsa Mosque compound is sacred only to Muslims. This is what infuriated the Israeli government.”

“The theatre of the absurd at UNESCO continues and today the organisation adopted another delusional decision which says that the people of Israel have no connection to the Temple Mount and the Western Wall,” he said.

“The present struggle over al-Aqsa is the consequence of Israel’s use of religious dogma as a cover for its violent settler-colonialism and ethnic cleansing in Jerusalem and the rest of the occupied West Bank since 1967,” Ali Abunimah, editor of The Electronic Intifada website, wrote for Al Jazeera.

“Temple groups, funded by the state and the occupation municipality in Jerusalem, are actively agitating for the construction of a Jewish ‘Third Temple’ in place of al-Aqsa Mosque.

“These are the groups behind the increasingly aggressive incursions into al-Aqsa, under the guise of seeking more access for Jews. But the outcome they seek is the destruction of al-Aqsa in order to build the temple; some groups have already developed detailed blueprints for it.”

The resolution, which was submitted by Algeria, Egypt, Lebanon, Morocco, Oman, Qatar and Sudan, was voted through on Thursday with 24 votes in favour, six against, and 26 abstentions. 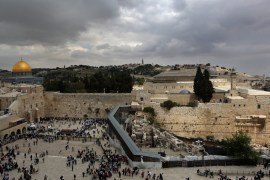 The resolution adopted by 33 countries condemns the Israeli government’s stewardship of Jerusalem.