Rafah, Gaza Strip – The besieged Gaza Strip has reached a milestone, with the birth of Walid Shaat bringing the territory’s population to two million.

But between the smiles, coloured balloons and posing for photographs, Jihad appeared preoccupied.

“I hope Walid sees better days than his older brother, Motasem,” he said, referring to Walid’s half-brother, who was just 28 days old when an Israeli bomb destroyed the family’s home, killing Jihad’s first wife, in Khan Younis during the 2014 Gaza war.

“Motasem and his mother were buried under the rubble for 40 minutes. His mother was killed, but he was rescued and survived to live without a mother.”

Jihad eventually remarried, and today, his family still lives in a rented apartment, awaiting their turn to rebuild through Gaza’s sluggish reconstruction process.

Compounding the heavy toll of war, the Shaat family has also borne the brunt of the disastrous economic situation in Gaza. Like tens of thousands of Gaza employees, Jihad has not received a full salary payment for more than two years.

“It is difficult to feel fully happy,” he said. “With so much poverty and unemployment, we cannot but anguish over the uncertainty looming over our children’s future.”

Newborn Walid is just one among a generation of Palestinians born during the decade-old siege on Gaza, enforced by Israel and Egypt.

“During 10 years of siege, the Gaza population increased by nearly half-a-million,” Jamal al-Khoudary, a Palestinian MP and the head of the Popular Committee to End Gaza’s Siege, told Al Jazeera.

“This population growth should have been met by new infrastructure, more power lines, sewage facilities, schools … [but] owing to the tight Israeli siege, none of that happened – and further, the Israeli wars damaged a significant portion of whatever resources the vulnerable population had.”

According to the Euro-Mediterranean Human Rights Monitor (EMHRM), 40 percent of people in Gaza are living below the poverty line, while 80 percent are dependent on food aid. More than three quarters of the territory’s industrial facilities have slowed or ceased production, Khoudary added, as the siege has crippled movement in or out of Gaza.

“The situation is nothing short of catastrophic,” he said.

The Gaza Strip is in dire need for strategic plans that address the mounting pressures facing the growing population. This cannot happen as long as Palestinians remain divided.

Mohammad Abu Jayyab, chief editor of the Gaza Journal of Economics, maintains that the growing population represents a liability rather than an asset, particularly as the United Nations has warned that Gaza could be uninhabitable within four years.

Abu Jayyab blames the Palestinian leadership for the disastrous state of affairs.

“Unemployment has approached a staggering 50 percent, and 27,000 new graduates join the ranks of unemployment every year. Meanwhile, no new public sector employment has taken place for years,” he said.

“The Gaza Strip is in dire need for strategic plans that address the mounting pressures facing the growing population. This cannot happen as long as Palestinians remain divided. Unfortunately, the current trends will most certainly continue.”

Rami Abdu, an assistant professor of law and finance and the chairman of (EMHRM), described the siege as collective punishment, calling it the primary obstacle to development in Gaza.

“The siege prevents steady supplies of medicine, food, construction materials and every other basic need,” Abdu told Al Jazeera, noting that Israel – which cites security concerns as a justification for the ongoing siege – has systematically destroyed Gaza’s economy and resources.

“Since the year 2000, over 7,000 fishermen have lost their jobs due to systematic Israeli restrictions and continued targeting,” he said. “Agriculture is increasingly becoming impossible to maintain, with Israel rendering 30 percent of the Strip’s agricultural lands inaccessible as a designated buffer zone.”

The solution, Abdu said, would be an immediate end to the siege and the unconditional opening of Gaza’s borders.

Meanwhile, Jihad Shaat refuses to give up hope, even as the future of Gaza remains unclear.

“I don’t know what the future holds for my children,” he said. “I hope Gaza breaks the siege, just as it broke the two-million record.” 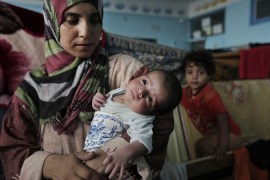 Palestinian officials say that at least 4,500 babies have been born since Israel’s military operation began in Gaza.