Rebel-held areas of Aleppo have been hit by a new wave of intense aerial bombardment, according to opposition activists, as Syrian President Bashar al-Assad said the capture of the northern city would be a “springboard” to pushing “terrorists” back to Turkey.

The UK-based Syrian Observatory for Human Rights said on Friday that dozens of overnight air strikes had struck east Aleppo, as fighting continued on the northern and southern edges of the city.

According to The Aleppo Media Centre, a group of opposition activists in the city, the overnight air strikes killed and wounded a number of people, with some buried under the debris.

A spokesman for the Civil Defence first responder group in Aleppo told Al Jazeera that at least six civilians had been killed in air strikes as of Friday afternoon.

“The biggest civilian hospital left in city of Aleppo is burning right now. It was hit by phosphorous bombs…,” said Ibrahim Abu Leith, the Aleppo-based spokesman for the rescue group also known as the White Helmets. Al Jazeera could not independently verify if there were any casualties.

The Sakhour hospital was put out of service earlier this year after it was targeted several different times by air strikes, but members of the Civil Defence have recently by working to repair it.

Since the Syrian army’s assault against rebel-held Aleppo began in late September, Russian and government bombardment has killed more than 370 people, including 68 children, according to an Observatory toll.

Over the past three days, as many as 100 people have been killed in the raids, rescue workers said, as the air strikes and shelling of the city’s east intensified.

The rising casualties in Aleppo have prompted an international outcry and a renewed diplomatic push, with talks between the United States and Russia planned for Saturday.

Aleppo, a constant battlefield in the long-running Syrian civil war, has been divided between opposition control in the east and government control in the west since 2012.

In an interview with a Russian newspaper published on Friday, Assad said that taking back the city, once the country’s industrial hub, would provide important political and strategic gains for his government.

“You have to keep cleaning this area and to push the terrorists to Turkey, to go back to where they come from or to kill them. There’s no other option,” Assad told Komsomolskaya Pravda. “Aleppo is going to be a very important springboard to do this move.”

Assad also told the newspaper that the Syrian civil war had become a conflict between Russia and the West.

“What we’ve been seeing recently during the last few weeks, and maybe few months, is something like more than Cold War,” he said.

Assad said that the actions of Turkey, which is backing Syrian rebels involved in an operation aimed at clearing Islamic State of Iraq and the Levant (ISIL, also known as ISIS) from its Syria border region, constituted an “invasion” and said that they violated “international law”.

As world powers prepared for new truce talks at the weekend, Russia announced that it was ready to give rebels safe passage out of the eastern sector of Aleppo, where more than 275,000 people are under siege.

“We are ready to ensure the safe withdrawal of armed rebels, the unimpeded passage of civilians to and from eastern Aleppo, as well as the delivery of humanitarian aid there,” Russian Lieutenant-General Sergei Rudskoy said in a televised briefing.

Moscow has come under mounting international pressure over the rising civilian death toll from the Syrian army’s Russian-backed campaign to take east Aleppo, including Western accusations of possible war crimes.

Analysts said Thursday’s safe passage offer was simply a gambit to relieve the pressure by appearing to present diplomatic alternatives.

“There is no change in the Russian strategy: the goal remains the destruction of rebel presence in Aleppo,” Syria analyst Thomas Pierret told AFP news agency.

“Blowing hot and cold allows them to reduce the pressure and empower those who want a strictly diplomatic approach to the Syrian question.”

US Secretary of State John Kerry and Russian Foreign Minister Sergey Lavrov are expected to be joined at talks in the Swiss city of Lausanne on Saturday by their counterparts from Turkey, Saudi Arabia and Qatar – all backers of Syrian opposition forces – as well UN Syria envoy Staffan de Mistura.

Before the talks, however, Lavrov said he had “no special expectations” because Moscow had not yet seen reciprocal steps from its Western partners.

Speaking to reporters in the Armenian capital Yerevan, Lavrov said Russia does not intend to put forward new initiatives on resolving the Syrian conflict.

“We want to get down to concrete work and see how well our partners observe the UN Security Council resolution [on Syria],” Lavrov said. “We are not going to propose anything else.” 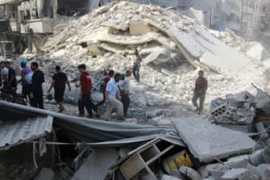 Residents say Russian and Syrian government air raids have destroyed vast areas of rebel-held half of the city.

At least 81 civilians killed on Wednesday alone in more than 50 Russian and Syrian air attacks on rebel-held Aleppo.