The mother faced an anguished decision: choosing which of her children to save.

With hunger gripping the remote Northern Bahr el Ghazal region of South Sudan, Elizabeth Athiel could either get urgent medical attention for her eight-month-old daughter, Anger, or make sure her other five children could eat.

The little girl was shockingly thin, but the medical clinic was a half-day’s walk away, and she would have to wait there for days until recovery. “I can’t leave the others alone here,” Athiel said, holding Anger in her arms.

It is not known what later happened to the child.

Her family is another victim of South Sudan’s civil war – in a part of the country that hasn’t even seen fighting.

In the government stronghold of Northern Bahr el Ghazal, there are indications of famine. A third of children in the region are estimated to be acutely malnourished.

The food crisis is evidence of how the conflict has devastated South Sudan’s ability to function. Since December 2013, tens of thousands of people have been killed. More than one million refugees have fled.

The UN calls South Sudan one of the world’s worst humanitarian crises.

Even as President Salva Kiir and his government have repeatedly promised full humanitarian access to this and other areas, South Sudanese officials have restricted aid amid hostility at the international community over its attempts to calm the fighting and protect civilians.

During a visit by the Associated Press news agency to Aweil in mid-September, aid airdrops by the UN’s World Food Programme (WFP) had been suspended because the government imposed what it called additional security requirements. They later resumed but were suspended again this week.

‘Spend it on weapons instead’

Minister of Information Michael Makuei Lueth recently told reporters WFP had been “intransigent” with his government.

“Did they come here for humanitarian services? They came there for their own ulterior objectives,” Lueth said, reflecting some officials’ view that the UN, with its peacekeeping mission and aid agencies, had too much authority.

Meanwhile, South Sudan’s government spends 44 percent of its budget on military and security, but just 11 percent on health, education and humanitarian affairs, according to the finance ministry.

“The government knows that it doesn’t have to spend money on healthcare and education because the international community is always going to do it for them, and they can spend it on weapons instead,” one diplomat said on condition of anonymity because he was not authorised to speak to the media.

South Sudan has long suffered from periods of hunger. The fighting has only made it worse.

Fighting has killed at least 60 people in the past week alone, the military said on Friday, stoking fears that the region could soon plunge back into full-scale war.

A spokesman for the rebels was not immediately available for comment.

A peace pact in 2015 ostensibly ended the fighting but has frequently been violated. Major clashes broke out again in July. Machar fled the country and is seeking medical treatment in South Africa. He has been replaced as vice president by General Taban Deng Gai.

Between four and five million people are at risk of death if they do not receive food assistance, according to WFP, and Northern Bahr el Ghazal has been hit hardest.

Roughly 60 percent of the population faces levels of hunger described as “crisis”, ”emergency” or “catastrophic”, according to UN agencies.

“I used to eat three times per day. Now I eat once,” said Nyibol Dut, a mother who said the price of two litres of grain has shot up 175 percent in two years. 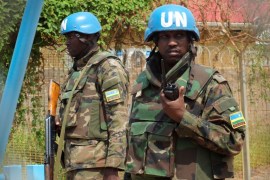 Government claims US proposal to boost troop numbers will lead to UN colonisation of South Sudan and beyond. 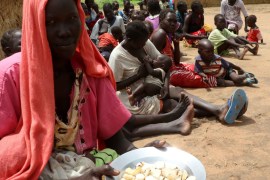 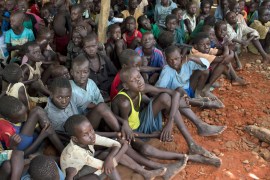 Parents of 300 children have fled without them from Northern Bahr El Ghazal because of worsening mass hunger.