At least 99 Syrians have been killed across the eastern half of the city Aleppo over the past two days, in what activists and residents believe was Russian and Syrian air bombardment of their rebel-held neighbourhoods.

According to rescue groups, Russian raids killed at least 13 civilians and wounded 25 on Thursday morning across several areas including Bustan al-Qasr and Sakhour. Unconfirmed reports also emerged on Thursday that 12 civilians, including four children, were killed in strikes by rebel groups on the government-held western half of the city. The Syrian opposition has not yet responded to the reports.

Aleppo has been a constant battlefield in the Syrian civil war, now in its sixth year. The city has been divided between opposition control in the east and government control in the west since 2012.

The city’s east has been a particularly troubling scene in the conflict, enduring continuous shelling and destruction from Russian and Syrian government efforts to pressure the rebels. Civilians have borne the brunt of the conflict.

Thursday’s deaths are the latest in the ongoing raids over civilian areas, according to local activists and rescue groups. “The Russian shelling will not stop for a second,” Ibrahim al-Hajj, head of media for the all-volunteer civil defence teams in eastern Aleppo, told Al Jazeera.

You rarely see any standing buildings. If you walk through the streets you will cry. The sight of the rubble will make you cry

“Russian warplanes have been dropping vacuum missiles since 2am yesterday night. There were more than six raids on our neighbourhoods.”

A resident of Bustan al-Qasr, a neighbourhood that has frequently come under fire, says the situation has become “horrific”.

“People in Bustan al-Qasr are not sleeping. They sleep during the day and stay awake at night because of the night raids,” Marwa Taleb told Al Jazeera. “There is complete destruction. You rarely see any standing buildings. If you walk through the streets you will cry. The sight of the rubble will make you cry.”

Taleb says the best people can do to keep themselves safe is to take shelter in an inner room of the house. “You cannot keep yourself safe with the types of weapons they’re using – such as the bunker busters. Those who are plunged into the ground cannot come up again. There have been so many incidents where people were driven into the ground and until now, no one was able to get them out,” she said.

On Wednesday, at least 86 Syrians were killed in Aleppo in attacks on markets and residential neighbourhoods according to the Local Coordination Committees (LCC), a grassroots group of activists recording details of attacks.

“The shelling is very violent. They are hitting us with bunker busters and cluster bombs. There is a lot of destruction,” Moataz Hamouda, an activist with the LCC in Aleppo, told Al Jazeera. “They are targeting the residential areas mostly. There have been horrific massacres.”

Rescue efforts have been going on since yesterday’s attacks, local journalist Zouhir al-Shimale told Al Jazeera.“The civil defence teams have not stopped the search for those under the rubble from yesterday and for the families that were buried in their own homes in the middle of the night.”

The heavy bombardment comes despite a Russian announcement of a meeting expected this weekend with the United States to negotiate a new ceasefire deal.

A previously brokered ceasefire collapsed last month after several days of calm and the city has been under continuous fire since then. 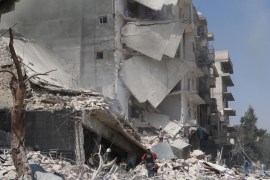