Abu Osama al-Shami, a 32-year-old Syrian from Raqqa, is a former member of the Islamic State of Iraq and the Levant (ISIL, also known as ISIS).

He is one of four ISIL deserters who reveals, in a new Witness documentary airing on Al Jazeera in its English language premiere, why he joined the armed group and ultimately decided to escape.

“ISIL Deserters Speak Out”, by Thomas Dandois and Francois-Xavier Tregan, was filmed over five months until early this year in Sanliurfa, a southeastern province of Turkey, which lies about 60km from the Syrian border.

Former ISIL members al-Shami, 32, Abu Hozaifa, 28, and Abu Maria, 22, who are all from Raqqa, and Abu Ali, 38, a Jordanian and the only non-Syrian among the documentary’s subjects, joined the armed group for similar reasons: a conviction that they’d be serving their religion and that ISIL would stamp out corruption. All four of them speak under a nom de guerre.

‘Don’t go there, you’ll regret it’

While they first welcomed their salaries and ISIL’s civic organisation, the four men grew disillusioned as they witnessed a culture of brutality and hypocrisy first-hand.

“ISIL Deserters Speak Out” is a rare look at the group’s inner workings and hierarchical military structure, as well as at the differences between Syrian and foreign fighters.

We also hear from three members of the Thuwar al-Raqqa – whose fighters are affiliated with the Free Syrian Army – which has a special cell that helps people to leave ISIL. In one year, they say, they helped to exfiltrate nearly 100 deserters and brought them to Turkey. They say many more fighters want to leave.

“ISIL is afraid that these deserters will reveal it for what it is,”  says Mahmoud Oqba, 33, a Thuwar al-Raqqa military commander.

“They’re trying hard to hide the truth and the bitter reality. ISIL has nothing to do with Jihad and Islam like they pretend. ISIL is an enemy of Islam. If deserters reveal to the outside world what they saw, it would be a disaster.”

The Witness documentary features rare mobile phone footage from deserters’ phones and collected by Thuwar al-Raqqa informants showing life under ISIL and within the armed group.

The testimonies reveal an entrenched culture of unchecked violence and cruelty: on-the-spot executions of people by security personnel at checkpoints for not carrying ID; a preference for using blunt weapons to execute; a mass grave called “the hole” – a deep pit in the desert where bodies are thrown; teenagers sent to the frontlines with just three days of training.

The deserters provide personal accounts of how they became disillusioned with ISIL.

“I thought people were going to like me, respect me, come to me. But I found that people were scared of me and didn’t like me,” Ali says.

“I found myself in a place where you’re under surveillance. They’re all intelligence agents. They all spy on one another. It’s just like the repressive regimes in the Arab world.”

But it was what happened to two 13- or 14-year-old girls who were offered to a governor in Fallujah as sex slaves that made him want to desert.

The governor rejected them and fighters started arguing over the girls. The children were executed. When Ali asked why, he was told it was because the girls were “causing strife between the brothers”.

“It’s insane. Does that mean we have to kill every woman out in the street? It’s strange, it’s madness,” he says. “This is what led me to regret my decision. At the camp I told myself, ‘I should’ve never come here’.

Thuwar al-Raqqa says that when it reaches out to different countries about their nationals who want to desert, they are often told: “Leave him there.”

“I advise all brothers, if you’re looking for an Islamic state, this is not the one you’re looking for,” Ali says. “It is neither a state nor is it Islamic. They’re criminals. Don’t go there, you’ll regret it.”

From the Witness documentary “ISIL Deserters Speak Out”. Watch the full film here. 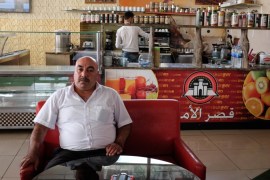 The changing face of Gaziantep