Shia pilgrims were targeted in the Afghan capital Kabul on Tuesday with at least 14 people killed as they gathered to mark Ashoura, one of the most important days on the Shia-Muslim calendar.

One attacker was killed after attempting to enter the shrine with a vest loaded with explosives, interior ministry spokesman Sediq Sediqqi said.

A senior police officer, who spoke to Al Jazeera on condition of anonymity, said the suicide attacker – dressed in a police uniform – entered the Karte Sakhi shrine near Kabul University in the west of the city.

A witness said the assailant shot dead a policeman guarding the entrance with a pistol before taking his AK-47 assault rifle and “firing randomly at worshippers”.

The interior ministry had previously said two attackers had been killed and at least one more assailant remained on the loose.

“At least 14 people were killed, including one policeman, and more than 30 were injured,” Al Jazeera’s Qais Azimy said, reporting from Kabul.

“Security forces in the area were already on high alert. They had warned the Shia community earlier to avoid gathering in public places because they apparently had intelligence that an attack might happen.”

No group has yet claimed responsibility for the assault.

The attack, which began just before 8pm (15:30 GMT), occurred as potentially hundreds of Shia Muslims gathered to observe the Ashoura holy day, which commemorates the 7th-century death of Imam Hussein, a grandson of the Prophet Muhammad.

In Afghanistan, Shia Muslims make up an estimated 15 percent of the population of about 30 million and most are ethnic Hazaras. Groups such as the Taliban and Islamic State of Iraq and the Levant (ISIL) view Shias as apostates and frequently attack their mosques and public gatherings.

The last attack on the Afghan Shia minority – on July 23 in Kabul – killed 84 people and left 130 injured. It was claimed by ISIL.

Official Daiulhaq Abid said the Shia community was issued a directive to keep Ashoura commemorations low-key “to ensure better security in Kabul city and the safety of mourners”.

“No one can stop them from mourning on Ashoura,” he said. “As much as they [enemies] try to create insecurity, they won’t be able to do it, and it will not demoralise the mourners, because this is the right path and even if we get martyred, it will be on the right path.”

Tuesday’s attack came as Afghanistan deployed hundreds of commandos backed by NATO air strikes in Lashkar Gah to drive Taliban insurgents from the southern city after their latest attempt to seize the capital of Helmand province.

The wave of violence underscored unravelling security in Afghanistan as the resurgent Taliban continue a push into urban centres 15 years after they were toppled from power by the US invasion. 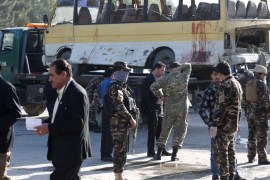 Taliban claims responsibility for two of three blasts in Afghanistan, with 14 Nepali security guards among the dead. 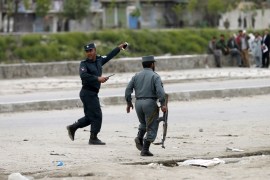