Three refugees have been hailed as heroes in Germany after they apprehended a Syrian fugitive wanted in an alleged bomb plot and handed him over to police in the eastern city of Leipzig.

Jaber al-Bakr, 22, was tied up and held by three other Syrians who alerted police. He was arrested on Monday, nearly two days after he evaded officers during a raid on an apartment about 80km away from where police found explosives.

On Tuesday, Leipzig Mayor Burkhard Jung thanked the Syrians, whom authorities are not identifying out of concern they could become targets for retribution.

“This is an immense success against terrorism and shows that a large majority of the foreigners and asylum seekers who live here want nothing to do with this form of radical Islamism,” Burkhard said.

Investigators suspect that Bakr, who had been granted asylum in Germany and was among 890,000 refugees who arrived in the country last year, was linked to Islamic State of Iraq and the Levant (ISIL) and considering Berlin’s airports as potential targets.

Worries over the difficulties of integrating large numbers of newcomers and over the possibility of some carrying out attacks have helped boost anti-foreigner sentiment in recent months. In July, several people were wounded in two attacks carried out by asylum seekers and claimed by ISIL. Both assailants were killed.

Andre Hahn, a prominent politician with the opposition Left Party, told Bayerischer Rundfunk radio that “the courageous people” who captured Bakr should be granted asylum “as soon as possible” in recognition of their courage.

“That would be very important for all honest refugees who need help and who in their absolute majority have nothing to do with the self-styled Islamic State or any terrorist activities,” Hahn said.

Bakr met the fellow Syrians, who eventually turned him in, after he fled the police raid in the city of Chemnitz and posted on an internet network for Syrian refugees that he was at Leipzig’s main rail station and needed a place to stay, German newspaper Bild reported.

One of the Syrians, identified only as Mohamed A, was quoted as telling the newspaper he and a friend picked Bakr up and took him back to another friend’s apartment, only later seeing police notices on Facebook about the bomb-plot suspect.

As Bakr slept on Sunday evening, they discussed with other Syrians on Facebook whether their guest was the fugitive, and then tied him up with electric cords.

OPINION: Who is ‘weaponising’ the Syrian refugees?

Maassen said in separate comments to ARD television that the suspect had bought chemicals online. On Friday, officials observed Bakr at a shop buying hot glue, which he said is “used by people who want to carry out suicide attacks”.

He and other officials were tight-lipped with details of Bakr’s suspected contacts with ISIL, saying that is part of their ongoing investigation.

“From intelligence information, there are good reasons to say that he had relations with ISIL,” Maassen said. 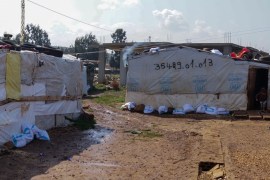 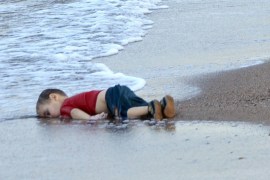 Three-year-old Alan Kurdi’s body was found on a Turkish beach on September 2, 2015. 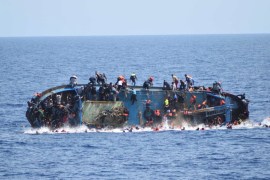 UN releases figures after deadliest week of the year for refugees as 880 lost their lives in Mediterranean.