France has announced it will ask the International Criminal Court (ICC) to investigate possible war crimes committed in Syrian city of Aleppo.

Rebel-held eastern Aleppo city, besieged since early September, has been the focus of an intense aerial bombardment campaign by Russian and Syrian fighter jets.

For their part, anti-government fighters are trying to break the siege and connect with other rebel-held territories to the west of Aleppo, Syria’s second city.

“We do not agree with what Russia is doing, bombarding Aleppo. France is committed as never before to saving the population of Aleppo,” Jean-Marc Ayrault, the French foreign minister, told France’s Inter radio on Monday.

He said President Francois Hollande will take into account the situation in Aleppo when deciding whether to see his Russian counterpart Vladimir Putin when the latter visits Paris on October 19.

INSIDE STORY: Are Russia and the US entering a new Cold War?

“If the president decides [to see Putin], this will not be to trade pleasantries,” Ayrault said.

Russian-backed Syrian forces have made significant advances in their renewed two-week-old offensive in Aleppo, seizing territory to the north and pushing back the front line in the city centre.

However, the southern Sheikh Said district fell on Monday to a coalition of rebel groups after they overpowered a foreign pro-government armed group attempting to hold it.

A rebel source told Al Jazeera that more than 20 pro-government fighters from an Iraqi militia – as well as four opposition activists being held captive by them – were killed in the clashes.

The source said opposition groups also suffered casualties but would not give a precise number.

Since the beginning of the Syrian military offensive on September 22, a few days after a joint US-Russia-brokered ceasefire collapsed, at least 290 people – mostly civilians – have been killed in Aleppo’s rebel-held areas, 57 of them children, according to the Syrian Observatory for Human Rights.

Another 50 civilians, including nine children, have been killed in rebel shelling of government-held areas of the city, according to the Britain-based monitoring group, which relies on a network of sources on the ground in Syria.

On Saturday Russia vetoed a French-drafted resolution that would have demanded an immediate end to air strikes and military flights over Aleppo, and for a truce along with humanitarian aid access throughout Syria.

In what offered a glimmer of hope, though, Turkish President Recep Tayyip Erdogan announced during a bilateral meeting with his Russian counterpart Vladimir Putin in Istanbul on Monday that the two countries had agreed to intensify military contacts and cooperate on delivering aid to Aleppo.

Against this background, Russia announced on Monday the creation of a permanent military base in Syria.

The move, announced by Nikolai Pankov, the country’s deputy defence minister, indicates that Russia is building up its capabilities in Syria despite a partial drawdown in March.

“By doing this Russia is not only increasing its military potential in Syria but in the entire Middle East,” Senator Igor Morozov, a member of the upper house of parliament’s International Affairs Committee, told the RIA news agency. 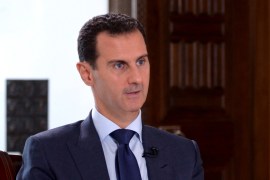 Zaher Sahloul, who attended medical school with the now-Syrian president, accuses his ex-classmate of war crimes. 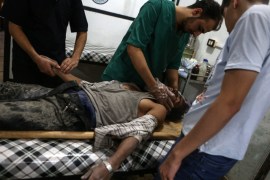