Donald Trump’s campaign has said that the Republican presidential candidate could go after former president Bill Clinton’s sexual history in criminal terms at Sunday’s debate with his wife, the Democratic candidate for president, Hillary Clinton.

Giuliani, a political ally and adviser, said Trump will cast Hillary “as the attacker” of women when she claims to be their champion.

The strategy comes as Trump reels from the release of his recorded description of his sexual aggression towards women .

Giuliani said “both sides have sinned. So how about we put that behind us?”

Trump had said there was “zero chance” he will drop out of the race, amid growing pressure from within the Republican Party for him to be replaced by another candidate. His running mate, Mike Pence had said he “cannot defend” Trump.

Late on Saturday, Trump also retweeted a pair of postings by Juanita Broaddrick, whose accusations that Bill Clinton raped her in 1978 were never tested in criminal court. Bill Clinton has long denied the accusations.

Broaddrick had also accused Hillary of threatening her after she made the accusations against Bill Clinton, when he was still attorney general of the US state of Arkansas.

The debate on Sunday will be held in St Louis in the US state of Missouri.

Hillary is also facing her own controversy after WikiLeaks published emails showing her views on free trade, which contradict her public pronouncements during the campaign.

Excerpts of the speeches given in the years before her 2016 presidential campaign included some blunt and unguarded remarks to top bank executives, which collectively had paid her at least $26.1m in speaking fees.

In a separate speech to Goldman Sachs employees, Clinton said it was an “oversimplification” to blame the US banking system for the global financial crisis in 2008.

But a distracted Trump did not seem to notice the email controversy, focusing instead on pushing attention towards Bill Clinton’s past infidelities as he apologised for  lewd and sexually charged comments he made about women  back in 2005, also leaked on Friday.

The debate on Sunday would be Trump’s “last time” to save the campaign, Jeanne Zaino, a political analyst and professor at Iona College, said in an interview with Al Jazeera.

“These revelations … have really upended not only his campaign, but the Republican Party as a whole,” Zaino said.

“So he has a real challenge on his hands tonight. He’s got to address people in the audience directly, and he’s got to apologise once again in a more convincing way than he did on tape the other night.”

But it is unclear “if it is convincing at this point to many independent and moderate voters, especially women that he needs to win over.

“Donald Trump has in the past surprised people. But the maths is not on his favour. Women vote in larger numbers than men. He needs some women in his side, and it is becoming increasingly unlikely that he will get that.”

Zaino also said that other Republican candidates are concerned that Trump’s controversy could affect their own races. 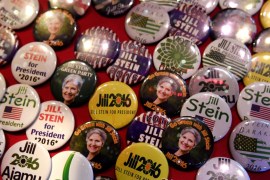 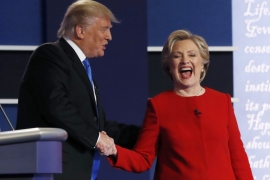 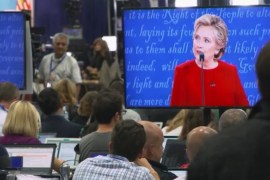