Russia is reportedly sending more fighter jets to Syria to ramp up its one-year air campaign in the country, as fierce fighting around the city of Aleppo intensified and diplomatic efforts to end the conflict stalled.

One week into a new Russian-backed Syrian government push to capture rebel-held areas in eastern Aleppo, residents said that the city was subjected daily to ferocious bombardment.

Al Jazeera’s team in Aleppo was on the scene when an air strike hit a residential area in the eastern part of the besieged city on Friday.

“There is now shelling with phosphorous bombs on a number of neighbourhoods in Aleppo city,” Al Jazeera correspondent Amr al-Halabi reported.

“People are absolutely terrified … A number of homes have been set on fire after they were targeted with phosphorous bombs,” he said, adding that civil defence forces were trying to extinguish the blazes.

Aleppo’s M10 hospital, the largest medical facility in city’s besieged rebel-held east, was hit by at least two barrel bombs on Saturday, according to a medical organisation that supports it.

“Two barrel bombs hit the M10 hospital and there were reports of a cluster bomb as well,” said Adham Sahloul of the Syrian American Medical Society.

Both M10 and M2, the second-largest hospital in the area, were hit by heavy bombardment earlier this week which UN chief Ban Ki-moon denounced as “war crimes”.

“There’s a big difference between [Syrian President Bashar al-]Assad and the Russian jets. The biggest weapons that Assad uses are the barrel bombs or surface-to-surface missiles, but since the Russians got involved, they’ve been using much more powerful weapons,” Ahmad Abu Rania, a resident of east Aleppo, told Al Jazeera.

At least 320 people, including nearly 100 children, have been killed in Aleppo since a US-Russian brokered ceasefire collapsed on September 19, according to UNICEF.

US Secretary of State John Kerry and Russia’s Foreign Minister Sergey Lavrov spoke by telephone for a third straight day on Friday. The Russian diplomat said Moscow was ready to consider more ways to “normalise” the situation in Aleppo.

Moscow and Washington have traded blame for the collapse of the ceasefire. US Secretary of State John Kerry admitted on Thursday that months of diplomacy to end the war had hit a dead end.

On Friday, however, Washington said that it would not, for the time being, carry through on the threat it made earlier in the week to halt diplomacy if Russia did not take immediate steps to halt the violence.

“This is on life support, but it’s not flatlined yet,” State Department spokesman Mark Toner told reporters.

“We have seen enough that we don’t want to definitively close the door yet.”

Nearly 300,000 people – including 100,000 children – are trapped in Aleppo’s rebel-held eastern districts, a pocket of resistance some eight miles long and three miles wide that civil defence workers say has been hit by 1,900 bombs in the past week.

The Su-25 is an armoured twin-engine jet that was battle-tested in the 1980s during the Soviet war in Afghanistan. It can be used to strafe targets on the ground, or as a bomber.

Russia’s defence ministry did not immediately respond to a request for comment. The US state and defence Departments declined comment on the Izvestia report.

The newspaper report came hours after the Observatory reported that 9,364 people, including about 3,800 civilians, had been killed in one year of Russian air raids in Syria. Later on Friday, the Russian government rejected the figures provided by the monitor.

Meanwhile, an audio recording obtained by The New York Times on Friday suggested that Kerry was frustrated that his diplomatic efforts to end the conflict had not been backed by a serious threat of US military force.

“I think you’re looking at three people, four people in the administration who have all argued for use of force, and I lost the argument,” Kerry told a group of Syrians, diplomats and others on the sidelines of the UN General Assembly meeting in New York last week, according to the 40-minute recording of the session.

“We’re trying to pursue diplomacy, and I understand it’s frustrating. You have nobody more frustrated than we are,” Kerry said.

According to The New York Times, several people in the meeting pressed Kerry on what they saw as contradictions in US.policy.

In an interview on Friday, CIA director John Brennan said that Russia’s actions in Syria over the past several weeks showed that Russian President Vladimir Putin has not been serious about negotiating a political solution to the conflict.

“I think that pushing back against a bully is appropriate,” Brennan told Reuters news agency.

“I think that is very different from rushing in and bombing the hell out of a place.” 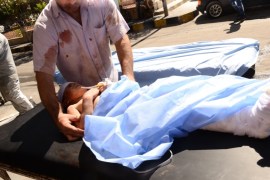 US to Russia: Stop Aleppo assault or Syria talks end

Kerry tells Lavrov US holds Russia responsible for use of incendiary and bunker buster bombs against Aleppo civilians.