Although Hurricane Matthew continues to bring heavy rain and storm surges to parts of the US east coast, it is no longer the threat it once was.

The death toll in the US from Matthew is believed to be 10, according to the latest Associated Press news agency tally. That is 10 too many, of course, but it pales into insignificance when compared with the almost 900 deaths recorded in Haiti as Matthew swept across the Caribbean nation.

While Haiti took a direct hit from Matthew, a Category 4 storm at the time, the hurricane remained largely off shore as it as it travelled up the US east coast.

Yet there was an inevitability about the impact of a severe storm on a country like Haiti. The nation is the poorest in the world. There are many reasons for this, including its turbulent history – slavery, colonialism, revolution, and occupation are often-cited contributing factors.

Nature has also not been kind to the country. It has few natural resources and it is prone to both hurricanes and earthquakes. The earthquake of 2010 resulted in the deaths of between 100,000 and 316,000 people.

When hurricanes strike Haiti, the impact is disproportionate to the severity. There are several reasons for this.

Firstly, infrastructure is poor and evacuation from areas likely to be affected by a storm is limited.

Secondly, there are relatively few safe havens for people who have been evacuated from their homes. In any case, as one half of the island of Hispaniola, there is a geographical limit to where people can be evacuated.

Thirdly, Haiti is extremely vulnerable to the heavy rain brought by hurricanes because of the destruction of the natural vegetation. It is one of the most deforested countries on Earth. Over the past 200 years, 98 percent of the forests have been felled to provide fuel and a source of income. There is little-to-no replanting because many of the people cutting down the trees are renting the land on which they are working. After cutting down the trees they move on.

As a consequence, the run-off from torrential rain – Matthew dropped nearly half a metre of rain on the country – is ferocious, bringing the risk of severe mudslides.

All this is in contrast to how the US was able to evacuate those at risk as Matthew made its way up the west coast of Florida, Georgia and the Carolinas. Excellent communications, advanced warning systems and a network of multi-laned highways allowed people to be moved from Matthew’s path ahead of time. In the US, weather disasters tend to be measured in dollars rather than lives.

More than half of those who lost their lives were senior citizens, less mobile as a whole, but also more likely to be among the poorest.

In recent years, countries such as China and India have invested in communications and infrastructure, allowing hundreds of thousands of people to be moved from the path of dangerous weather systems if necessary.

Unfortunately, Haiti is one of those island states, along with its neighbour the Dominican Republic, and others such as Vanuatu, Tonga and the Philippines, which will continue to be affected heavily by severe weather for many years to come. 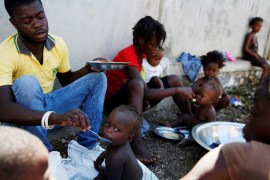 At least 13 people die in latest outbreak of disease as officials warn of a rising death toll after Hurricane Matthew. 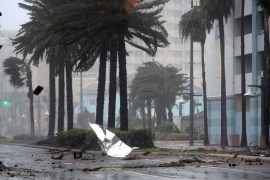 Hurricane Matthew hits Florida and heads north in US

Storm leaves at least one million residents in US state of Florida without power, as storm surge threatens east coast.