Polish politicians have withdrawn draft legislation that would introduce a near-total ban on abortion in a vote that marks the first major domestic setback for the ruling conservatives after massive street protests.

The ruling Law and Justice party (PIS) unexpectedly withdrew its support for draft proposals drawn up by an independent anti-abortion campaign group, in an unscheduled parliamentary committee meeting late on Wednesday.

“PIS continues to back the protection of life,” party leader Jaroslaw Kaczynski told parliament. “And it will continue to take action in this respect but it will be considered action.”

Politicians rejected the bill in a 352 to 58 vote during a hastily convened session of parliament, with 18 members abstaining.

Up to 100,000 women dressed in black protested throughout Poland on Monday against plans to tighten the country’s already restrictive abortion rules.

Under the rejected plans, abortion would have been allowed only in the event of a direct danger to the mother’s life and not in cases of rape, incest or serious health issues for the mother or when the baby was likely to be permanently handicapped.

Among the provisions in the proposed law was the possibility of five years in jail for women who received abortions, and their doctors.

Worryingly for PIS, a socially conservative, Eurosceptic party which swept to power last October with pledges to help poorer Poles and to boost the state’s role in the economy, some of the women protesters had previously voted for the party. 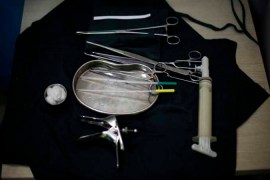 Left to their own devices, tens of thousands of Polish women travel abroad to terminate unwanted pregnancies.