At least six people have been killed in an attack on a residential building in northeast Kenya by suspected fighters from the Somalia-based group al-Shabab, authorities have said.

Security official Mohamud Ali Saleh said on Thursday that the assailants used explosives to infilitrate the gated building in Mandera county, less than a kilometre away from the Somalia border town of Beled Hawo.

“We highly suspect the attackers are members of the Shabaab insurgent group, who have sneaked across the porous border,” he said.

“These criminal gangs are desperate to hurt innocent Kenyans since they were defeated badly and routed out of all their hideouts in the neighbouring country.”

The Mandera region on the Somali border has often been targeted by al-Shabab, which says it will continue a campaign of violence in Kenya until the government there withdraws its troops from Somalia where they are part of an African Union force.

They were then forced out of the building by police, she said, adding that when officers tried to get inside the complex to retrieve bodies an explosion went off.

“So now they are waiting for bomb experts to see if there were more explosive devices before the place is declared safe to go in,” she said.

READ MORE: Somalia in a Snapchat – more than just violence

“We have suffered another sad attack,” the governor of Mandera county,  Ali Roba, wrote on Twitter.

“If not for the quick response by our security forces, we would be talking of many more casualties now,” he told Reuters. “From the nature and style of the attack, it will obviously be al-Shabab.”

Al Jazeera’s Soi said there has been a recent upsurge in attacks on government installations, police and security forces, including an al-Shabab attack that killed six police officers in June.

“The government issued a terror alert in March, saying that parts of Mandera, particularly along the border are prone to attacks. They said that al-Shabab have infiltrated some of those areas,” she said.

“But Roba has repeatedly criticised the government and security officials of not doing enough to step up efforts to fight this group and to provide security in that area.”

Repeated attacks in Kenya by al-Shabab have killed hundreds of people in the past three years or so and hurt the country’s vital tourism industry.

The assaults have often been in the northeast, near the long and porous border with Somalia, but the group has also struck coastal areas popular with tourists and the capital Nairobi, where al-Shabab gunman attacked the Westgate shopping centre in 2013. 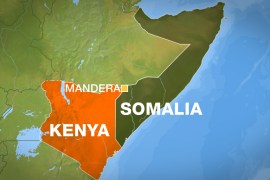 Children killed in attack on buses in northern Kenya

At least six people have died after the shooting in Mandera, near Kenya’s border with Somalia.