The political drama in Morocco has launched with a bang as the country gears up for Friday’s legislative elections.

Mass protests that rocked much of the Middle East in 2011 and challenged the balance of power in many Arab countries lit a spark in Morocco, paving the way for the adoption of a new constitution and for the PJD to come to power.

If the PJD manages to win and lead a new coalition government for a second consecutive term, it will be the first party in the modern history of the kingdom to do so.

READ MORE: The fall and rise of Morocco’s Left

But the battle will not be easy. PJD is expected to face stiff competition, especially from the opposition Authenticity and Modernity Party (PAM), which is said to be close to the palace.

In the absence of a strong Moroccan left, which is experiencing some of its toughest challenges yet, PAM is considered the PJD’s main competitor, and could gather enough seats in parliament to head up the next government.

But the race is too close to call. PJD has a strong urban electoral base, while PAM enjoys support from rural areas.

Some analysts say the PJD’s attraction has waned and the Islamic party has played its role. It successfully helped in absorbing Arab Spring revolutionary spirit and managed to convert the challenge into reform.

According to Duke University political scientist Abdeslam Maghraoui, a North Africa expert, Morocco’s monarchical institution is unlikely to still view PJD leader Abdelilah Benkirane as a real partner, now that the threat of uprisings is over.

“The PJD basically helped the monarchy navigate the pressure of the youth uprisings in the region,” Maghraoui said, adding that the monarch has emerged more powerful in the wake of the Arab Spring.

According to Vish Sakthivel – the Fox Fellow at the Foreign Policy Research Institute’s Middle East Programme, who has extensively researched political Islam in Morocco – while PJD’s victory in 2011 was considered historic, “these years’ elections have lost their significance and people have lowered their expectations about the capacity for a government to bring change to the country.”

This pessimistic trend lingered after PJD failed to keep its promise to address the yawning gap between the rich and poor.

READ MORE: Morocco votes – The voices of the people

The PJD, however, remains popular and has managed to push for some economic reforms. The party is credited with lowering the budget deficit and diminishing the state’s contribution to subsidising goods, a crucial cost-saving dossier that no other government dared to tackle before.

Party leaders defended their achievements and accused opponents of a defamatory campaign ahead of the general election.

PJD chief and outgoing Prime Minister Abdelilah Benkirane said an anti-government protest staged in Casablanca recently was not all it seemed.

Interviews and videos posted on social media showed protesters saying they felt lured to the demonstration under false pretenses – some said they were told they were protesting against the rape of a child.

“If the protesters who participated are really against me, I can accept it,” he said. “If some of you were manipulated, I forgive you,” Benkirane told reporters at a recent news conference.

Critics say the government’s power has increased over the past few years – and so too has its authoritarianism.

“In my opinion, the Moroccan regime has become a lot more powerful in the past five years, flexible in its PR machine in portraying itself as progressing towards implementing democratic changes,” said Zineb Belmkaddem, 32, a leading Moroccan human rights activist and a member of the so-called February 20 Movement, which led protests in 2011.

“The truth is that activists are still being silenced and human rights associations are repressed and see their activities banned.” 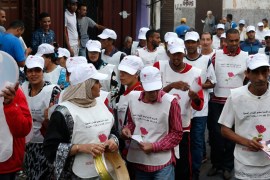