Antakya, Turkey – As he discusses the war in Syria, Gunes speaks rapidly, his brow creased into a scowl.

A Turkish Alawite who runs a quaint, bustling cafe in the old city of Antakya, he lambasts the international community for portraying Syrian President Bashar al-Assad as a “monster”.

“The real monsters are fighting in his land. What do you expect him to do?” Gunes told Al Jazeera, speaking under a pseudonym for fear of retribution.

“They say Assad bombed and massacred his people, but it’s not true … Yes, he’s bombing Aleppo, but he’s bombing the terror groups who hide behind innocent people and use them as human shields,” he said. “If you don’t bomb them, they will kill more soldiers.”

After Syria’s civil war erupted more than five years ago, members of Antakya’s Alawite community poured into the streets to voice their support for the Assad regime, rejecting global calls for the Syrian president to step aside amid a massive public uprising.

The city, with a population of more than 200,000 people, is located in the Turkish province of Hatay, about 150km north of Syria’s Qardaha, home to the Assad dynasty. The Assads also belong to the Alawite sect of Shia Islam. Most of Turkey’s Alawites, estimated to number around one million, live in Hatay – and many say they feel they have been marginalised within Turkish society.

I've heard some Syrians say we don't just need one Assad - we need 100 Assads to fight this.

As the war in Syria grinds on, with Ankara backing Syrian rebel fighters, the Assad regime and its Russian allies have been accused of mounting atrocities and violations of international law. But while residents say the prevalence of pro-regime demonstrations in Antakya has dwindled in the years since 2011, many members of the Alawite community privately maintain their support for Assad.

“In Syria before, healthcare, education – these were free, and now people cannot access any services. The opposition terrorists have destroyed everything,” said Selcuk, a 35-year-old Alawite from Antakya who would not provide his last name for fear of retribution.

The residents of Hatay who remain in the pro-Assad camp are typically bound by ethno-religious loyalties or by the fact that they still have family members in regime-held areas of Syria, local journalist Akin Bodur told Al Jazeera.

Many different religions, cultures and nationalities – from Turkmens, to Christians, to Sunni and Shia Arabs – populate the Hatay region, he said, noting that activism on both sides has been on the downturn in recent months. There have been just a handful of pro or anti-Assad protests in 2016, compared with dozens in years past, he said.

“People are used to hearing about the war in Syria … They are simply living with it,” Bodur said, noting that for the pro-Assad camp particularly, “it may be that Russia’s involvement started to affect the level of support. Assad’s supporters prefer to remain silent [since] they don’t want to be seen as supporting an international war.”

Unver Tumer, a 30-year-old Turkish Arab who works in Antakya’s medical industry, noted that while Alawites in the area tend to support Assad, people of other backgrounds are more likely to sympathise with the moderate Syrian opposition.

“I believe that no president should stay for more than two terms … Assad should work with the opposition to create a real, national government for the country,” he told Al Jazeera.

The last public demonstration of support for Assad that Tumer could recall took place months ago, and drew just a few dozen people. But to Mufeed Haroon Khattab, a 64-year-old who fled to Antakya from the western Syrian city of Hama in 2012, the notion of continuing support for Assad at any level is incomprehensible.

“He is a criminal and a dictator who has massacred Syrians,” Khattab told Al Jazeera, noting that when he first arrived in Antakya four years ago, some Turkish Alawites lashed out at him, saying: “You say you want freedom, but you sold out your homeland to the West.”

is a criminal and a dictator who has massacred Syrians.”]

As hundreds of thousands of Syrian refugees have flowed into Hatay over the years, however, the political climate has improved, he said. “They have realised it is in their interests to treat us well,” Khattab surmised.

According to Hakan Mertcan, an associate professor at Mersin University with expertise on Turkey’s Alawites, the community’s support for Assad is unlikely to falter in the months and years ahead, as the sect has felt increasingly targeted by and isolated from Syria’s opposition movement.

“Nobody can convince the Alawites that [Syrian rebels] will bring democracy,” Mertcan told Al Jazeera, noting that Alawites continue to view Assad “as the assurance symbol of Syrian unity, multiculturalism [and] secular life”.

Back inside a breezy restaurant in a quiet residential area of Antakya, Selcuk described the Syrian war as a “financial game” in which a disorganised array of armed fighters – many non-Syrian – have been angling to seize power.

“If it was a real political movement, [Assad] would have stepped aside by now. But it’s not. We can’t call a bunch of people killing and beheading others a revolution,” he said, accusing Western powers of pushing for regime change in Syria in order to bolster their own economic interests in the country.

“The Syrian army is fighting imperialism around the world … Five years ago, many people said Assad must go, but after seeing the situation in Syria – hunger, displacement – they are more supportive.”

Gunes maintains that many Alawites in Antakya share similar views – and while he continues to live, work and engage in lively debates with people across the city’s religious and political spectrum, he appears immune to criticism of the Syrian regime.

“The media says Assad broke the ceasefire. This is not true. Assad [might have bombed] the aid convoy, that’s true, but … they could have hidden anything in there, weapons even,” Gunes said, rationalising a bombing that even Assad himself has denied carrying out.

Khattab, whose brother was among thousands of people tortured in the prisons of Assad’s father, suggests that such attitudes are the result of blind loyalty in the face of ugly truths.

“When Bashar came [into power in Syria], we were initially optimistic, because he was not his father,” he said. “But it turned out he was the same.” 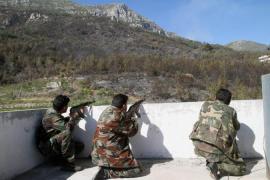 As Syria’s civil war escalates along the Turkish border, many in Turkey are questioning the country’s involvement.