Thousands of pensioners took to the streets of the capital Athens and tensions boiled over as they approached the prime minister’s residence.

The Pensioners’ Federation, which organised the march, said tempers frayed when police blocked the street on which Maximos House, the prime minister’s residence, is located with buses and riot police.

Television footage showed protesters rocking a police bus back and forth in an apparent effort to tip it over.

The ministry confirmed in a statement that “the order has been given for any use of tear gas to be forbidden in protests by workers and pensioners”.

If adhered to, this would mark a reversal in police tactics not seen since the beginning of the economic crisis in 2010.

Increasing disillusionment on the street has stung the ruling left-wing Syriza party ever since it capitulated from its anti-austerity position last July, accepting a third €86bn ($96bn) bailout loan under harsher terms than its predecessors.

It was forced to axe €1.8bn ($2.02bn) in spending on pensions and cut hundreds of millions of dollars’ more in a pension law passed last spring.

“We don’t like to have our road blocked. We like our marches to reach the place where we wish to protest,” Pensioners’ Federation president Dimos Koumbouris told Al Jazeera.

“Why are they afraid of protesting pensioners? We weren’t going to storm into Maximos House. We had no such intention. And why do they use those repressive techniques against workers and pensioners?

“The cuts that have happened over the years – including by this government – have broken us. Cuts to primary pensions and supplementary pensions, cuts to covered medicines and healthcare costs, things we’ve been paying for all our lives.”

A recent survey by the United Pensioners’ Network, a social security watchdog, found that 45 percent of pensioners earn less than the €665 ($746) a month the National Statistical Service deems necessary to not be classified as “poor”.

It also found with unemployment above 23 percent, more than half of Greek households are now dependent in whole or in part on income from a pension.

The network estimates that pensions have fallen by 20-50 percent during the crisis.

Pensioners were a key Syriza constituency when it first came to power in January 2015.

The communist party, which was key to organising Monday’s protest as well as four public sector strikes in the past year, now revels in showing up Syriza as a pseudo-left party.

The political injury to Syriza seems to be enduring. An opinion poll published on Monday in Syriza’s mouthpiece, Avgi, said 90 percent of respondents were unhappy with the government’s performance, and 51 percent support an election just a year since the last one. 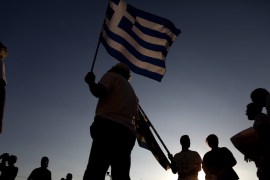 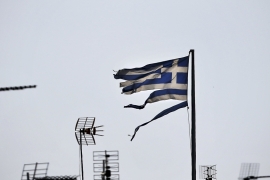