Attackers opened fire at a paramilitary camp in Indian-administered Kashmir, according to an army spokesman, killing one border guard and wounding another.

According to reports, it was the 46 Rashtriya Rifles army camp in Kashmir’s Baramulla district that came under attack on Sunday evening.

Sunday’s incident comes just days after forces from India and Pakistan were involved in exchange of fire across the de facto border dividing the Kashmir valley.

“An exchange of fire between soldiers and attackers is still on.”

An official confirmed that one soldier was killed in the attack.

“One BSF personnel was killed and one injured when militants tried to enter an army camp,” said local Superintendent of Police Imtiyaz Hussein.

The camp lies about 54km from Srinagar, capital of Indian-administered Kashmir.

Tensions between the neighbouring countries have been on the rise following the Uri attack on the Indian side of the Kashmir border last month in which 17 soldiers were killed.

India then claimed to have carried out “surgical strikes” across the border which the Pakistan army dismissed as an “illusion”.

Meanwhile, India’s defence minister said it will take “some days” to secure the release of a soldier who was captured after he “inadvertently” crossed over into the Pakistani side of the Kashmir border.

“He had crossed over, which happens in border areas. There is a well established mechanism through the Director General of Military Operations which has been activated,” the minister was quoted as saying by the PTI news agency.

“Since the situation is tense right now, it will take some days to bring the soldier back.”

The spike in tensions between the two nuclear-armed rivals follows weeks of deadly protests in Kashmir.

More than 80 civilians have been killed, mostly in clashes with forces during protests against Indian rule, in the worst violence in the region since 2010. 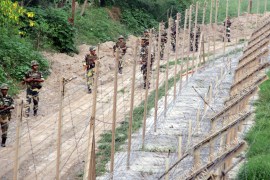