Hurricane Matthew, a potentially devastating Category 4 storm, swirled across the Caribbean towards Haiti and Jamaica where residents frantically stocked up on emergency supplies and authorities urged people to evacuate threatened areas.

The US National Hurricane Center in Miami said on Sunday that Matthew’s winds had slipped slightly from a peak of 260km/h to a still potentially destructive 240km/h.

Forecasters said the Category 4 storm was expected to pass near or over the eastern tip of Jamaica and southwestern Haiti on Monday, and rainfall totals could reach between 25mm to 38mm with isolated maximum amounts of 63mm.

In Haiti, civil protection officials broadcast warnings of the coming storm surge and big waves, saying the country would be “highly threatened” from the approaching system, which is expected to start affecting Haiti and Jamaica on Sunday night. They urged families to prepare emergency food and water kits.

In Jamaica, where there is also a hurricane warning, flooding temporarily closed the road linking the capital to its airport.

Carl Ferguson, the head of the marine police, said people were starting to heed calls to relocate from small islands and areas near rural waterways.

Residents of the capital, Kingston, crowded supermarkets to buy bottled water, canned food and batteries. In the coastal town of Port Royal, officials were urging residents to seek refuge in government shelters once they open up on Sunday.

US evacuates families from Guantanamo Navy base

After passing Jamaica and Haiti, Matthew is expected to reach Cuba on Tuesday, potentially making a direct hit on the US Navy base at Guantanamo Bay.

A mandatory evacuation of non-essential personnel, including about 700 family members of military personnel, was under way at the base and everyone remaining behind was being told to take shelter, said Julie Ann Ripley, a spokeswoman.

The forecast track would also carry Matthew into the Bahamas, with an outside chance of a brush with Florida, though that would be several days away.

“It’s too early to rule out what impacts, if any, would occur in the United States and Florida,” Dennis Feltgen, a spokesperson at the National Hurrican Center, was quoted by The Associated Press news agency as saying.

Matthew caused at least one death when it entered the Caribbean on Wednesday. Officials in St Vincent reported a 16-year-old boy was crushed by a boulder as he tried to clear a blocked drain. 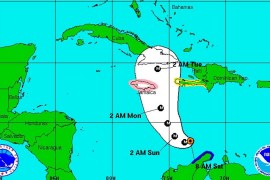 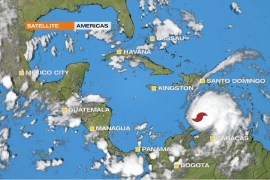 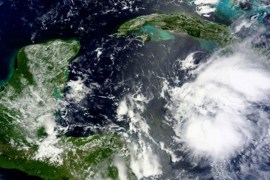